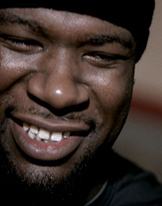 After watching University of Wisconsin-Whitewater wheelchair basketball player Matt Scott in Nike's latest television commercial which aired Dec. 31, viewers won't have any excuses not to carry out their New Year's resolutions.

Scott, a senior from Detroit, Mich., and a member of the U.S. Paralympic Basketball team, appeared in Nike's "No Excuses" commercial.  The spot is the latest in the company's series of "Just Do It" ads.  In the spot, Scott gives off a list of excuses people come up with for not working out.  Throughout the spot he can be seen bouncing a basketball and taking shots at the hoop.  The spot ends with a shot of Scott in his wheelchair slamming down two basketballs simultaneously and saying the words, "My feet hurt."

The commercial aired New Year's Eve on ESPN and MTV and New Year's Day on FOX, ESPN, the NFL Network, BET, the Comedy Channel, FUSE, ABC Family among others. Documentary filmmaker and commercial director Errol Morris directed the spot.  He won an Academy Award for "The Fog of War," directed "Gates of Heaven" among others and is currently working on a project to be released in 2008 " "Standard Operating Procedure."

According to Nike, this spot is a way to motivate everyone who has conveniently forgotten there is no substitute for working out and running when it comes to staying fit.  What better motivation than seeing an athlete with a disability who has risen to an elite status in their sport.  In the case of Scott, who has no use of his legs, there is no excuse for an able-bodied individual to get the body moving.

"Overcoming a disability and striving for athletic excellence is certainly not for the weak," Scott said.  "I am proud I was chosen to represent disabled athletes and show that we do not make excuses."

The spot is available on You Tube at www.youtube.com