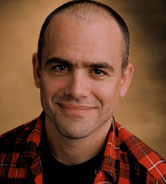 Wisconsin author and humorist Michael Perry will be honored with the third annual UW-Whitewater Chancellor's Regional Literary Award on April 14.

Perry will be honored at a 7 p.m. reading on April 14. The event is free and will be held in the Summers Auditorium of the James R. Connor University Center. The public is invited to attend the reading. Perry will sign books after the reading. Books will be available for purchase at the event.

Interim Chancellor Richard Telfer said that Perry's writings inspire readers of all ages and backgrounds. "I am so pleased that this award is being given to a writer who not only captures the essence of rural Wisconsin but also engages our senses with his vivid descriptions and humorous takes on everyday life."

Perry is being honored for his body of work including "Truck: A Love Story," "Population: 485" and "Off Main Street."

About "Truck" here's what Booklist wrote:

"One wouldn't think that repairing a beat-up old pickup could become a life-altering undertaking. And yet, for Perry, it was all that and more: an epic adventure that encompassed love, diplomacy, a little hydroponics, and even some danger (like setting yourself on fire). Perry, who is also the author of -Population: 485 (2002), propels the story forward as if he were writing a novel, helped by a cast of characters who range from the lightly offbeat to the totally bizarre. The prose is straightforward, almost deadpan, but behind the words, the reader feels a heightened sense of irony, as though Perry knows how weird it all is but figures, what the heck, it's true so why not just go with it. The heart of the book tells dual love stories--man and truck; man and woman--that are, in their own ways, equally passionate. Perry writes about fixing his truck as if he was resurrecting it, but in fact, he may more accurately be said to have been resurrecting himself. The truck is transformed, certainly, but the multiplicity of changes that Perry goes through run deeper and likely will last longer. Recommend this one enthusiastically to fans of self--exploration books and truck-repair manuals--and all readers in between. Motorcycle maintenance for a new century."

Perry is the third author to receive the Chancellor's Regional Literary Award. The first award was giving in April 2006 to C.J. Hribal, a professor at Marquette University, for his novel, "The Company Car." In April 2007 A. Manette Ansay was honored for her body of work including author of "Vinegar Hill," "Limbo," and most recently "Blue Water."

The award recognizes writers who celebrate all that makes the Upper Midwest special.