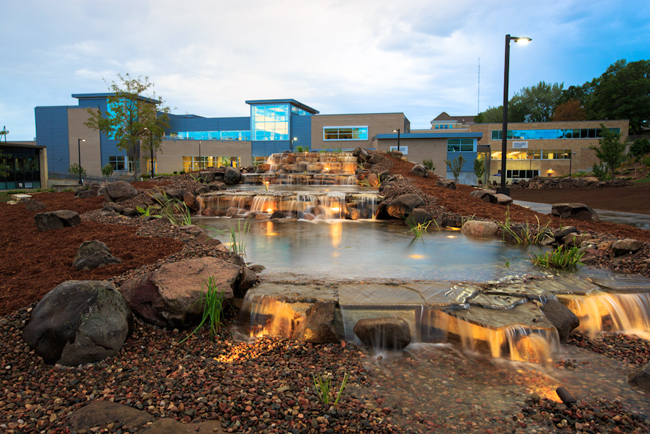 At the heart of the University of Wisconsin-Whitewater campus, a beautiful new landmark is making a splash.

A series of waterfalls -- 135 feet long -- descends along the north mall, creating a natural and beautiful focal point in the busiest section of campus.

The water feature was constructed over the summer with the help of funds donated by Jerry, Gregg, Carol and Tom Theune in memory of their parents, Warren and Virginia.

The Theune family has been part of the UW-Whitewater campus for more than 60 years. Warren and Virginia -- who met at a school play -- earned their bachelor's degrees, respectively, in 1950 and 1948. All four of their children attended. Warren joined the faculty in 1955, eventually becoming assistant dean and director of the student teaching program. Gregg Theune is retiring this month after nearly 33 years as the university photographer. Jerry's son, Ryan, graduated in 2004 and his daughter, Megan, is a senior marketing major.

"The university gave a lot to our family, and continues to do so," Gregg Theune said. "We wanted to give something back that would last for many years."

"The goal was to create a place where students and staff members could engage with one another, have reflective moments and break free from their normal routines," Jerry Theune said. "UW-Whitewater is a green-oriented campus. When we saw the plans for the water feature, the natural look and sustainability features were really appealing to us."

Timothy J. Hyland Hall sits atop a large water table, and the university is pumping water from that source, according to Greg Swanson, director of facilities, planning and management.

Limestone rocks from Door County and glacial erratics native to the Whitewater area were used to construct the waterfalls. Ornamental grasses, shrubs, weeping cherry trees and roses will be incorporated into the landscaping.

Thirty-five lights illuminate the ponds and falls at night.

"One aspect we're really excited about is the natural water sound reverberating throughout the north mall," said Steve Bertagnolli, landscaping and grounds supervisor. "You have 22,000 gallons of water splashing down the rocks and through the ponds. As the plants mature, it's going to be even more attractive." 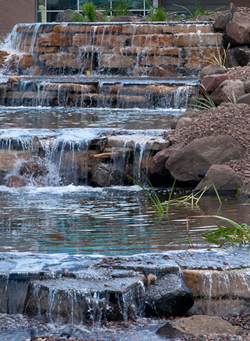 "The new water feature is a beautiful addition to campus," said John Jensen, junior political science major and Whitewater Student Government president. "It greatly enhances the visual experience of UW-Whitewater. It was a very generous donation and I'm glad that we were able to make this great addition to campus."

Hundreds of people will walk past the water feature every day, as it is located between the James R. Connor University Center and Hyland Hall -- one of the busiest corridors for pedestrian traffic.

"It's going to be a focal point for the entire campus," Gregg Theune said. "I can already see families wanting to meet at the waterfall to take graduation pictures."