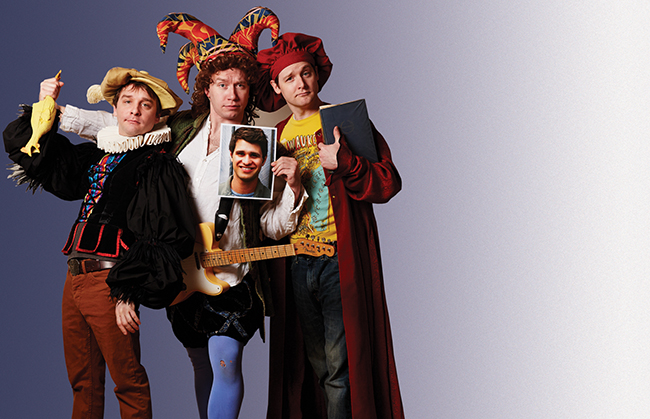 Rick Pendzich '03, fondly remembers playing the roll of Nathan Detroit in the UW-Whitewater production of "Guys and Dolls," a musical depicting the relationship between gambling and love.

"The play took place my last year of school," Pendzich said. "We all knew each other really well at that point in our college career, so we had a lot of fun on stage."

Twelve years after that production's final curtain call, the foursome will be joining each other on stage once again.

The four actors perform together this fall in "The Complete Works of William Shakespeare," at the Milwaukee Chamber Theatre from Nov. 19 to Dec. 14, 2014.

The production is a comedy about four rowdy overachievers attempting to perform all 37 of Shakespeare's plays in two hours. With the added bonus of live music incorporated into the script, this production aims to take a new perspective on Shakespearean theatre.

The producing artistic director for the Milwaukee Chamber Theatre, Michael C. Wright, approached the four actors about getting the UW-Whitewater group back together for the show.

"Michael's known us for so long and has worked with us ever since we were undergraduate students," Klopatek said.

Wright was an interim acting instructor at UW-Whitewater from 2000-2001, teaching these four at-the-time aspiring performers.

"Early on I recognized that not only did these four guys have a tight bond, but they were also incredibly playful and inventive," Wright said. "I've had opportunities to hire them as actors over the years at my theater company, but I'm particularly thrilled to bring all four of them together in one production."

"It's always a pleasure to know that my fellow Warhawks are by my side," Klopatek said. "Not only are they my co-workers, they are some of my best friends for over ten years now."

Besides the four actors, other UW-Whitewater alumni are working on this production as well. Steve Barnes '05 is the scenic designer, and Cara McMullin, the marketing director for the Milwaukee Chamber Theatre, graduated from UW-Whitewater in the spring of 1999.

"I've been able to work with fellow UW-Whitewater alumni throughout my career and we always share a sense of pride from being a part of such an amazing academic community," McMullin said. "I took advantage of the countless opportunities at UW-Whitewater and it made a difference when I was looking for a job and I already had relevant work experience."

All four actors have performed in previous Shakespeare productions and have the abilities to dive into the text, Stoeger said.

"The art of Shakespeare is very interesting. All of the aspects of the story are important, but the text needs to drive the production for it to be successful," Stoeger said.

No matter where their careers take them after this production, Klopatek, Pendzich, Stoeger and Truschinski say they will always remember their roots.

"We were all roommates at one point in Whitewater, so it's a great opportunity to just be in the same room all at the same time again," Truschinski said.

UW-Whitewater students, faculty, staff and alumni can get $10 off tickets for the 8 p.m. Saturday, Dec. 13, performance. Just mention "UWW10" when ordering by phone 414-291-7800 or at the box office. Purchase online at milwaukeechambertheatre.com and enter the discount coupon code: UWW10. Performances at the Broadway Theatre Center, 158 N. Broadway, Milwaukee.