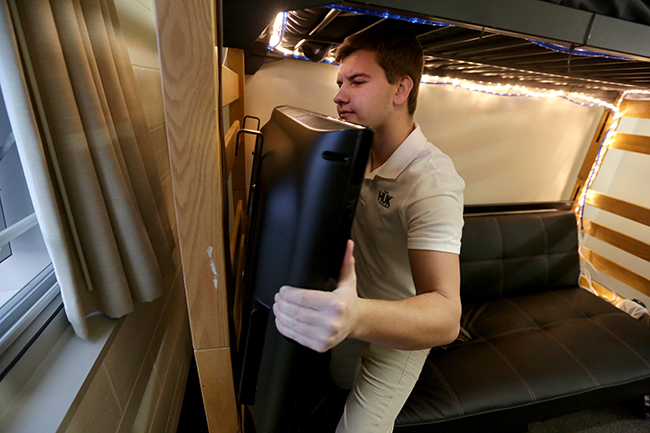 Sam Lukach's business idea came to him as he was looking for a way use the space in his residence hall room more efficiently.

"I was living in Arey Hall and my TV didn't fit. I went to the hardware store and bought two pieces of metal and bent them with a hammer to form them into hooks. I went back to my room and screwed them into the back of my TV and hung it on my lofted bed.

"Then my roommate and floormates wanted to buy them, and that's when I knew this was a need," said Lukach.

In that moment, HUK TV Mounts was born, and now Lukach, a UW-Whitewater sophomore communications major from Pewaukee, Wisconsin, is busy promoting one of the hottest student business ideas in the nation.

He won first place at the Collegiate Entrepreneurs' Organization national conference, held Nov. 5-7 in Kansas City, Missouri.  And Dec. 7, he joins 23 of the top student entrepreneurs in the country in presenting his idea at the U.Pitch Elevator Pitch Competition and Showcase in Chicago, where he'll compete for $11,000 in prizes. Judges include "Shark Tank" star and FUBU founder Daymond John.

Lukach isn't the only UW-Whitewater student competing in Chicago. Tom Ziolkowski and Chris Gifford will pitch "Chapter Companion," a web-based application that helps campus organizations communicate with each other. 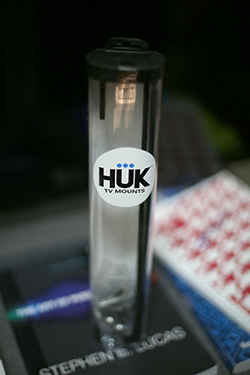 For Lukach, his success is a dream realized.

"When I was in fourth grade, I wanted to become an entrepreneur. Within the second week of being at UW-Whitewater, I found an opportunity that would allow me to do so," he said.   Having an idea as a student entrepreneur is one thing, but developing that idea into a startup and then pitching it nationally is an entirely different realm, according to David Gee, co-adviser of UW-Whitewater's CEO chapter.

The university's thriving entrepreneurship program — which welcomes Warhawks of all majors and disciplines — offers numerous resources and avenues for students to turn business ideas into reality. Entrepreneurs are guided by faculty experts and gain real-world experience by competing in local business competitions.

In the last few years, UW-Whitewater students have won prizes in prestigious state and national competitions, and even received mention in The New York Times.