The television series features a panel of millionaire and billionaire investors — "sharks" — who give entrepreneurs the opportunity to pitch their business ideas and request money in exchange for a stake in the company or a share of profits. While the sharks didn't take the bait in the case of MobCraft, Schwartz had the opportunity to promote his business on national television in front of millions of viewers.

Read more about Schwartz and his business in the article below, originally published in the 2015 edition of Whitewater Magazine, College of Business and Economics edition. 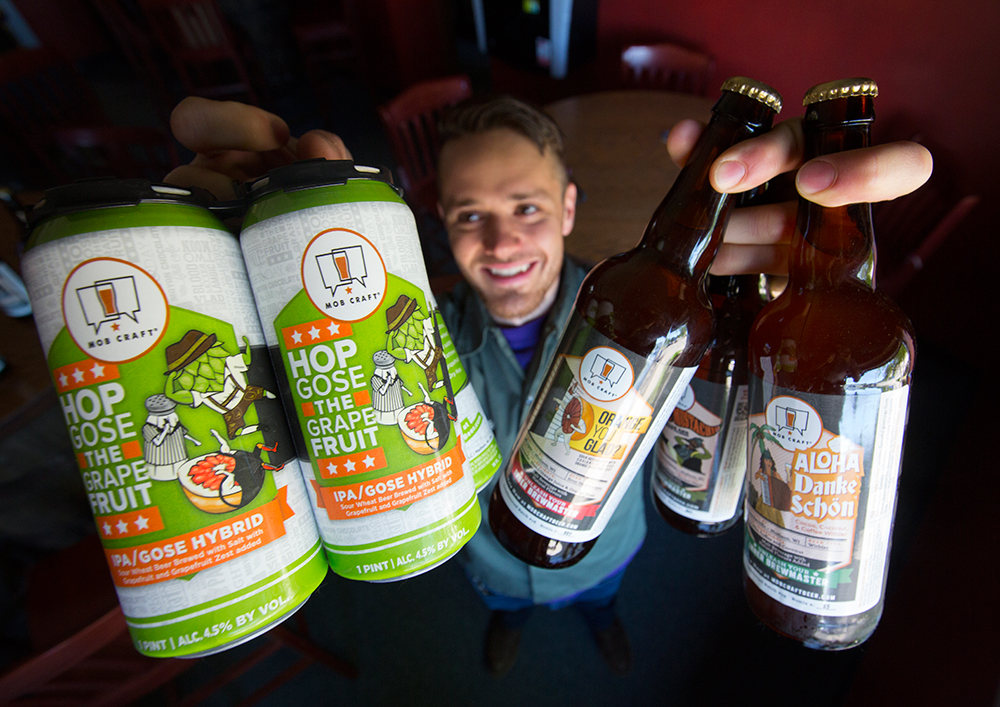 On an early summer visit to MobCraft Beer, located on Madison's east side, there was much discussion of viscosity, low attenuation and temperatures and frequent checking and tinkering with gauges. The facility — a jumble of stainless steel vats and tanks and racks of utensils — was a buzz of activity as brewer Andrew Gierczak prepared to brew Hop Gose the Grapefruit, a fan favorite from April 2014 that is being brought back as a seasonal. House of Brews head brewer Page Buchanan worked his own barrels, exchanging questions and comments with Gierczak as he waited for the water to reach 172 degrees.

"It's a bigger beer, so I'm adding more malt," said Gierczak, when Buchanan questioned the numerous bags of malt from Chilton leaning against the vat, ready to be added. Most of the hops that would be added later in the day would also come from Wisconsin sources.

Steam rose as Gierczak stirred the malt grains into the hot water with a long perforated wooden paddle, ensuring there were no clumps in the mix, as if it were a giant vat of oatmeal. When asked if he would miss this particular part of the handcrafting process when production moves later this year to much larger facilities in the Walker's Point neighborhood of Milwaukee — where the malt will be mechanically added by a grist hopper and stirred by a rake system — he said, "Maybe someday, but right now...."

"It's important to realize that the beer idea was number 10 on a long list of ideas," said Henry Schwartz, MobCraft co-founder and alumnus of UW-Whitewater with a degree in entrepreneurship and a graduate of the Launch Pad startup accelerator program, referring to the company's path to success.

MobCraft is getting a heady amount of attention these days, for everything from its unusual brews — perfect for novelty seekers in a market awash in choices — to its unique business model, which employs the "crowd" to both submit ideas and vote on batches of beer and fund the craft brewery's growth. That it is the first crowdfunded craft beer brought a New York Times journalist to the site recently, as part of a story on crowdfunding initiatives across the U.S.

Just as a beer starts as a mash, continues through a process of fermentation and is finally bottled or canned, so develops the innovative mindset that leads to enterprises such as MobCraft. Schwartz may be a born entrepreneur, but the skills that he and co-founder Giotto Troia have used to forge MobCraft — along with Gierczak — were cultivated during their time on the UW-Whitewater campus. 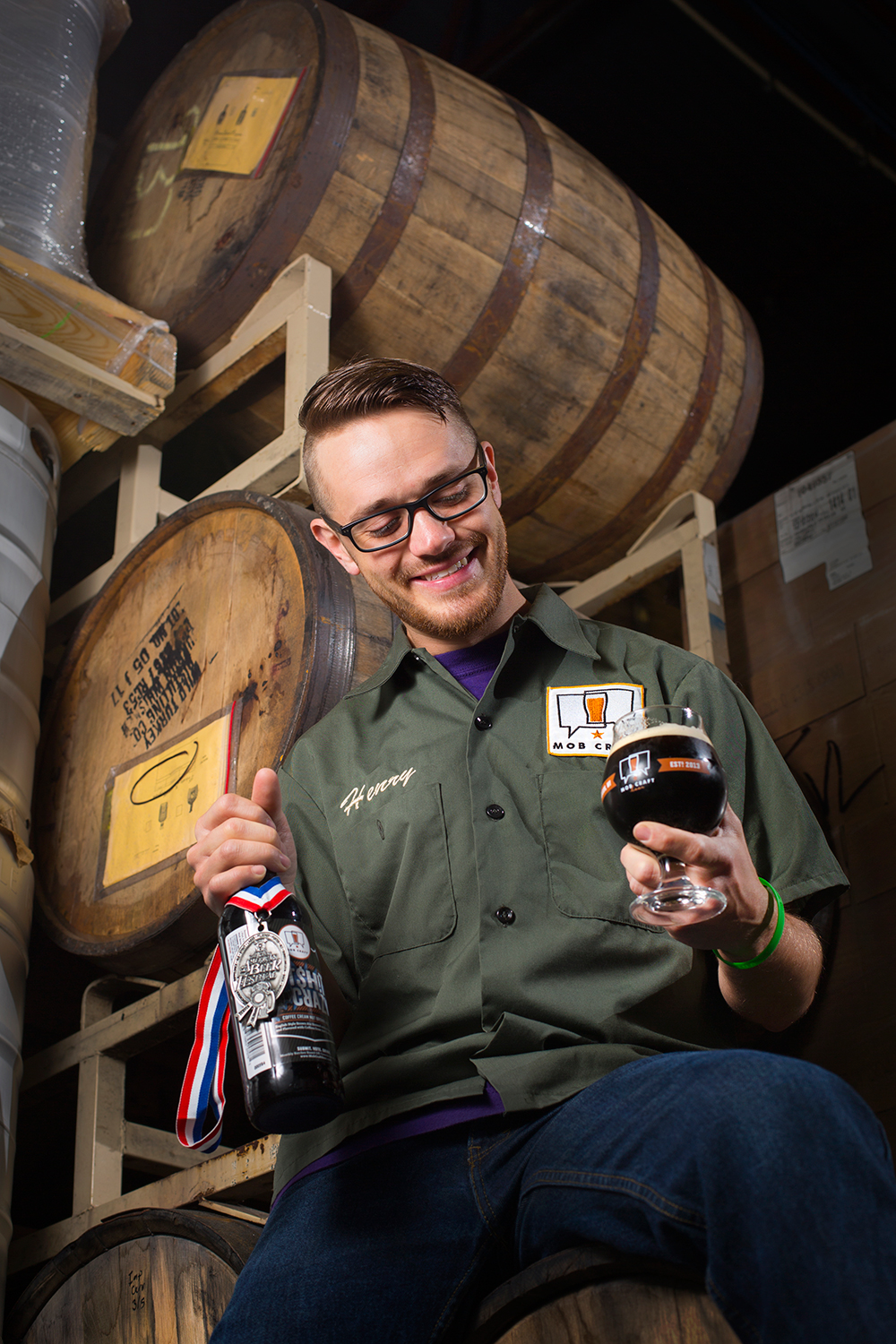 Schwartz, who has an ebullient personality and seems always on the verge of laughing, spent his early years in Denver with his parents. In second grade, after his father died unexpectedly, his mother took him out of school and the two traveled the world for 10 months, backpacking through 11 countries. His entrepreneurial journey began at age 12 when he started his own babysitting and lawn-mowing business.

The two later moved to Menomonie, where Schwartz took over a skate shop, Board to Death, while in high school. When asked about what led him to start his own business at such a young age, Schwartz said he was following his passion.

"I later realized that both of my parents were entrepreneurs," he said with a grin. "My dad opened his own law practice, and my mom, who was a seamstress, once moved to Denver with her sewing machine strapped to her motorcycle."

When it came time to consider colleges in 2007, Schwartz was drawn to UW-Whitewater because of its business school — he especially loved the new building, Hyland Hall — and the school's size. "I liked that as a student, I would matter," he explained. 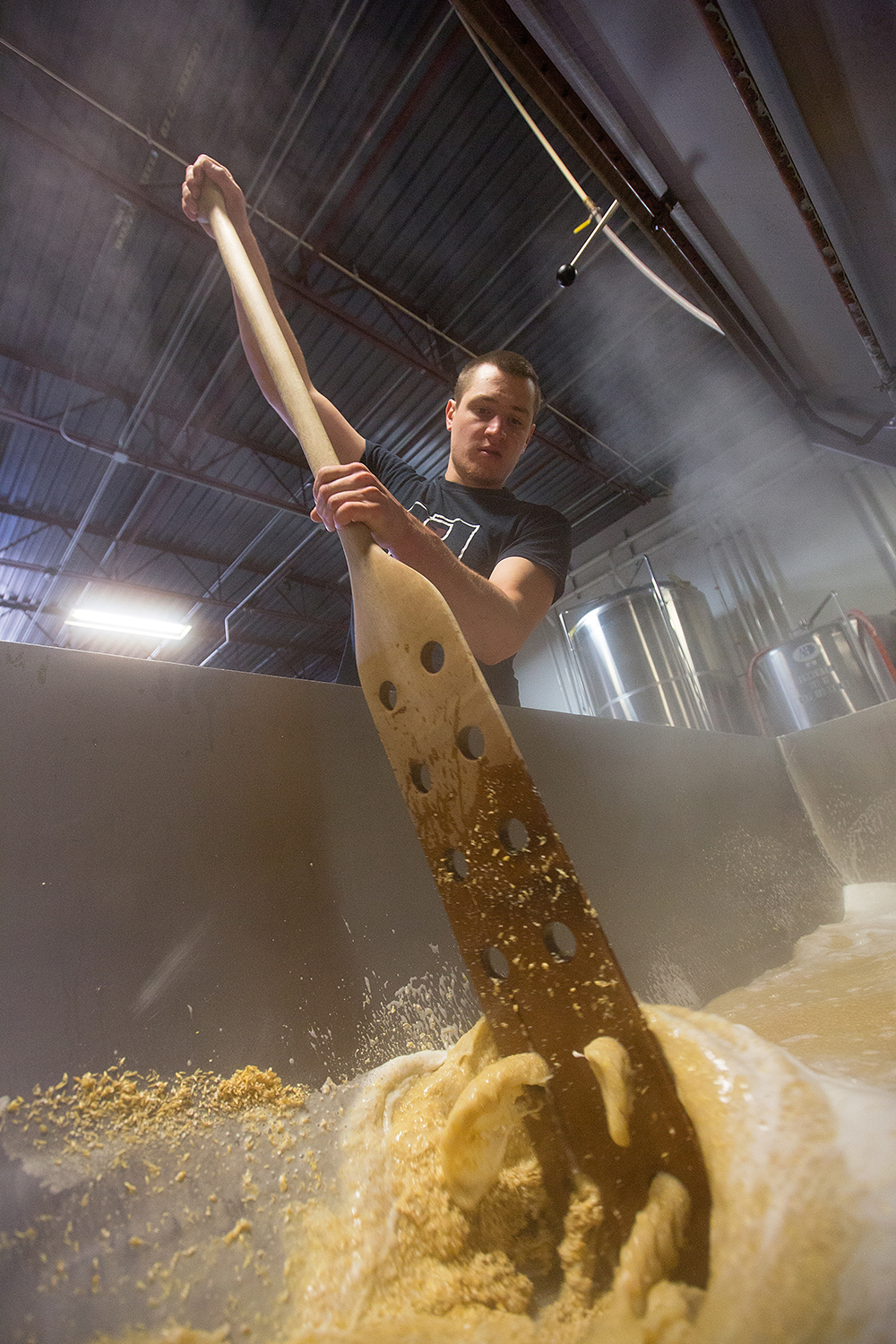 On campus, Schwartz began to stir things up. As a student in the entrepreneurship program, he joined the Collegiate Entrepreneurs' Organization and met kindred spirits, including Troia. By their second semester, the two would be co-leaders of the organization. Another CEO member, Tony Gierczak, had a twin named Andrew who was going to UW-Madison and studying microbiology as he tinkered with a still he had inherited from his grandfather. It was Andrew Gierczak who taught Schwartz how to home brew, and soon the latter was holding brew-a-thons in the house he rented off campus, where friends would gather to try recipes and test the results.

Schwartz, who retained an international mindset from his early travels and studied abroad in Lima, Peru, and Buenos Aires, Argentina, thrived at UW-Whitewater. He and Troia were brought into the Launch Pad program, which gave them access to marketing and design and a broader spectrum of faculty and staff, whom Schwartz cites as mentors who were especially helpful as he and Troia developed their ideas.

The Launch Pad program is designed to provide students like Schwartz, a 2011 graduate with dual degrees in entrepreneurship and Spanish, and Troia, who graduated in 2012 with a double major in marketing and entrepreneurship, with comprehensive support, including expert coaching, round tables and weekly training on startup fundamentals.

In an entrepreneurship class, Schwartz read a case study that introduced to him the concept of crowdsourcing as a way to gauge consumer demand and minimize the risk and cost inherent in warehousing product. Threadless, an ecommerce site founded in 2000, featured designs created and chosen by an online community. Based on community feedback, about 10 designs were selected each week, printed on clothing and other products, and sold through its online store. Schwartz figured that the Threadless crowd-sourced model would allow him to start a craft brewery without costly warehousing.

After he graduated in 2011, Schwartz worked at his day job doing marketing for a video interviewing company and continued to work on his dream — and the business plan. 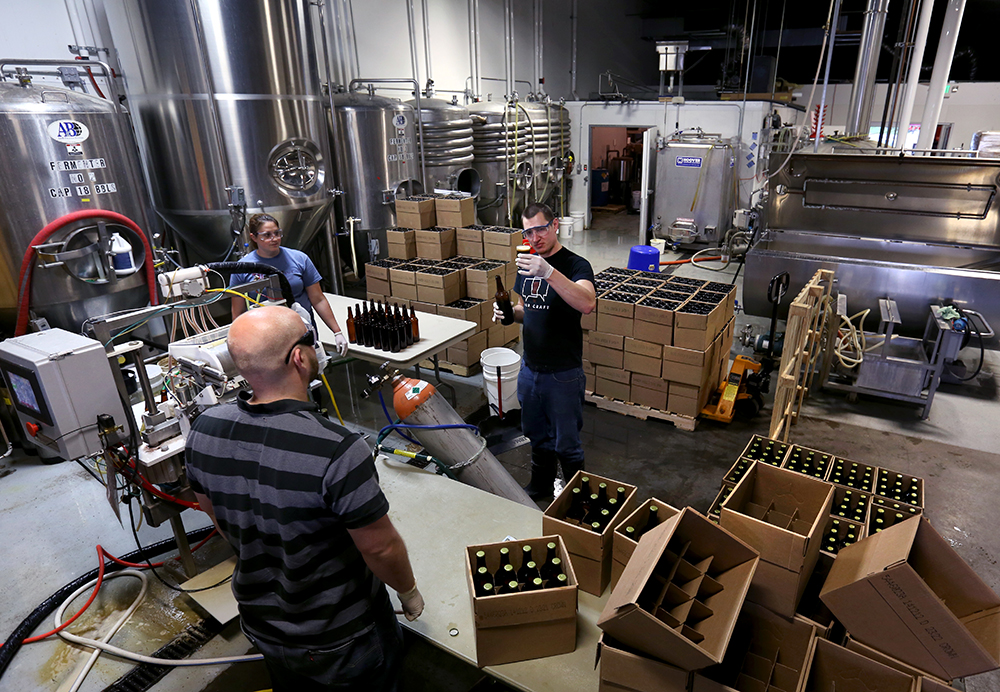 MobCraft is in the process of moving from the space shared with House of Brews in Madison, shown here, to a much larger facility in the Walker’s Point neighborhood of Milwaukee.

Schwartz recalls that Gierczak's sister came up with the name MobCraft - maybe it was "CraftMob" at first — at one of the weekly meetings they held around the kitchen table while they worked on the business plan. As he reached out to people in the craft brewing business to learn as much as he could, Schwartz heard about brewer Page Buchanan, who was looking for partners to share the House of Brews space and equipment. "That was the a-ha moment," said Schwartz — the moment the dream moved from the kitchen table to the warehouse floor. Schwartz quit his job and joined forces with Troia and Gierczak to get things going.

The partners developed a process for beer enthusiasts to submit ideas or actual recipes for new brews and then post the selections online, where people vote for their favorite.

"You decide our beer," the website proclaims. "New ideas each month. The most pre-ordered gets brewed."

To vote, a "mobcrafter" has to agree to purchase four bottles of the beer they voted for, should it win. If their beer is not selected, they are offered a chance to purchase the winning beer. And every month the process is repeated. The result is some truly unusual combinations and a deeply enthusiastic and engaged fan base.

When developing the brand, Schwartz leaned on another benefit of the Launch Pad program, its business support services. Renée Melton, associate professor of art and design, helped Schwartz develop the look of the brand and eventually designed the MobCraft's iconic logo, a clever mash-up of the product and its social roots.

A good logo is essential to a business because "it's the first thing that people look at," Schwartz said. Melton's design, which features speech bubbles intersecting in a beer glass, is "so cool" that people want to buy T-shirts and other products with the image, he said. Designing labels for the monthly winners was another challenge. Melton had a visiting artist who worked in the style Mobcraft was going after come in to a class and work with students, who then drew sample labels based on actual beer names. The two students whose work was selected are designing the brand's labels to this day. 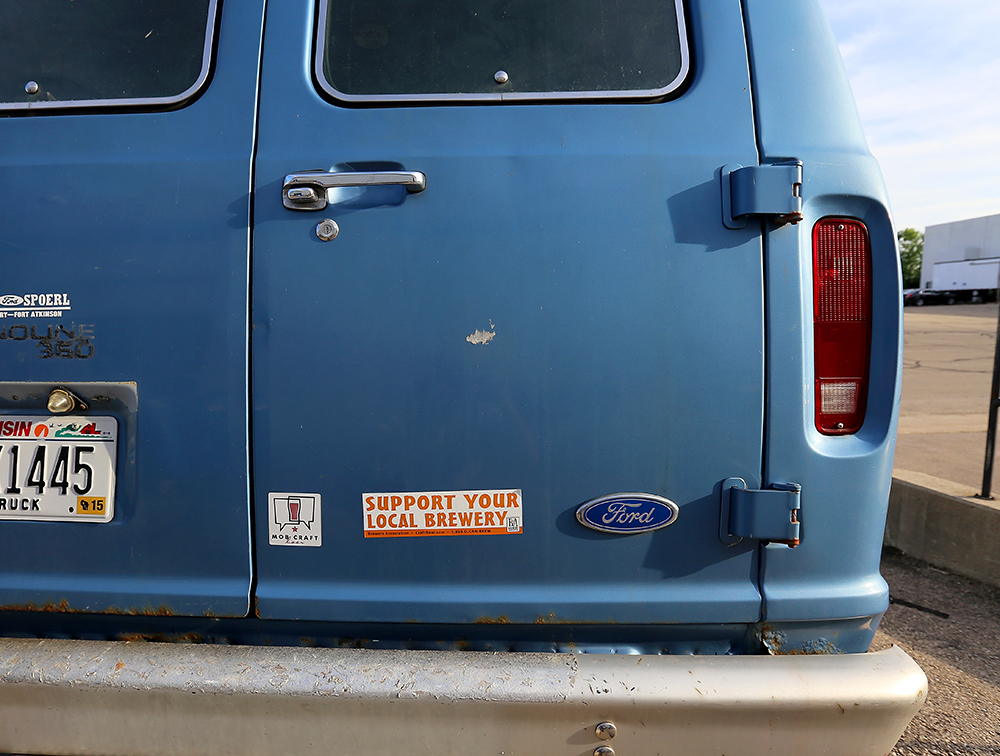 Schwartz focuses on financials and running the business, including the nuts and bolts of spreadsheets and licensing. Giotto has been the catchall for sales and distribution — delivering all of the beer across the state — and will be moving on to focus on marketing as the operations grow.

Hop Gose the Grapefruit is being brewed in a 15-barrel tank. The first batches in 2012 were brewed in a 7-barrel tank they called "Mary, the vessel of truth." MobCraft found its new big 30-barrel tank online — "Mary" is out back, waiting for a buyer — and Schwartz prefers to buy equipment locally whenever possible.

MobCraft beers are found in about 70 pubs and restaurants at any given time around Wisconsin, with a dozen places consistently carrying them. Another 75 retail stores carry the brand. Most of the beer is sold in "bombers" — 22-ounce bottles. A mobile canning unit from Midwest Mobile Canning allows them to offer pint cans as well.

"We do bombers because they are the best vessel for the high-quality, fresh ingredients inside," explained Schwartz. "It leads to a more expensive beer that is more savored and best shared among a few friends."

Schwartz currently has two UW-Whitewater students interning with MobCraft: Alex Steeno and Rianne Lund. Steeno, an integrated science and business major, works as a strategic research and innovation analyst intern and Lund, a marketing major with an emphasis on entrepreneurship, manages their social media, inbound marketing and festival appearances.

"I love working with students," said Schwartz. "It's just not one touch point. There are so many great opportunities for alumni to connect and share their expertise." Schwartz, true to his entrepreneurial DNA and Warhawk roots, refers frequently and enthusiastically to other ventures that UW-Whitewater graduates are involved with. He goes back every semester to visit classes and helps judge the business plan competition.

"I'm seeing the caliber of ideas getting better. There's lots of energy at CoBE," said Schwartz. "The ethos (of innovation) is still here."