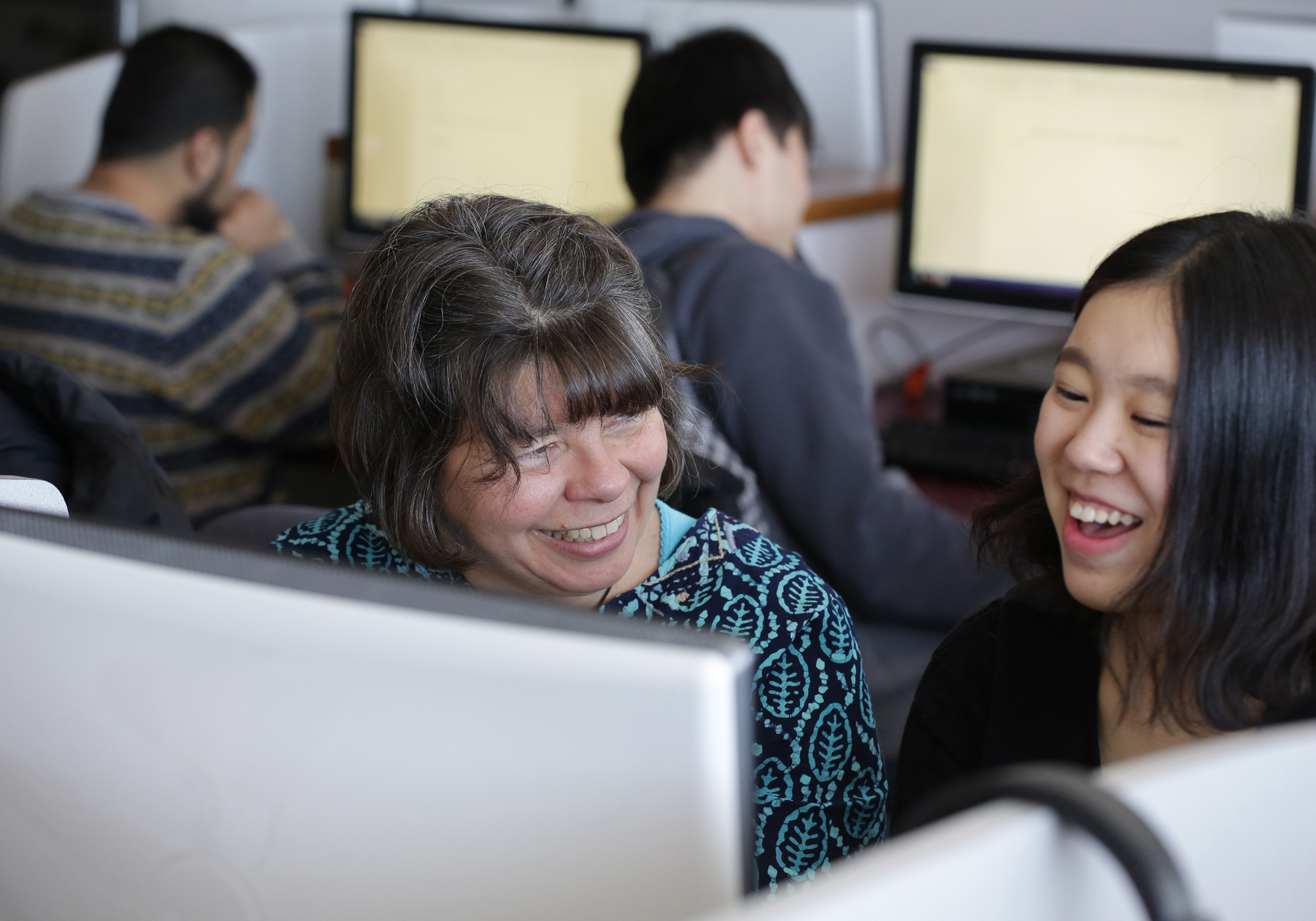 Professor Susan Huss-Lederman works with Cathy Liu, an international student from China, in her College Writing in English as a Second Language course on February 17, 2016. Photo by Craig Schreiner.

Since she arrived at the University of Wisconsin-Whitewater in 1995, Susan Huss-Lederman has focused her academic expertise on students who bear the weight of being "the first."

First-generation students, newcomers to the United States, and many international students find their way into her literature and composition classes. They are excited and anxious. Many feel tremendous pressure to succeed.

Huss-Lederman admits her job and focus require optimism — the belief that intellectual ability and life opportunities of her students will improve as they become effective speakers, readers and writers.

"They've got a lot of eyes on them," she said. "While many students have supportive families, some come from families that might not necessarily encourage college. They are juggling the identity of who they are at home, who they are here, and what their career aspirations are. Everyone is confronted with new ideas that they accept, reject and debate, which can be stressful."

In her classroom, Huss-Lederman explores diverse texts that create a climate of trust and reveal universal human traits.

"I hope students feel they can relate, respect diversity, empathize with one another and gain knowledge of the social context in which certain people live. There is history behind all of us, and the past shapes who were are now." 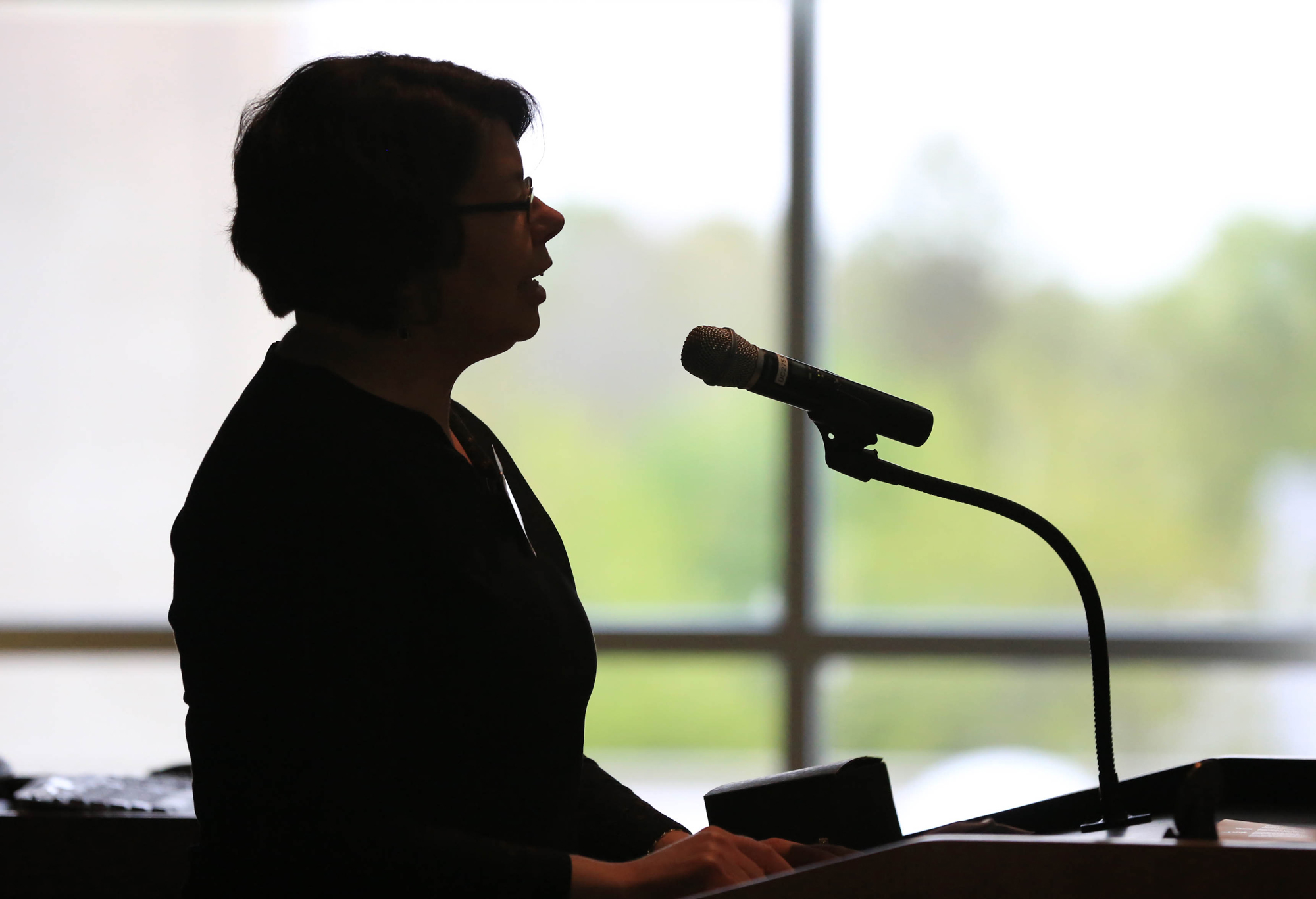 Professor Susan Huss-Lederman speaks at an event honoring faculty and staff on the UW-Whitewater campus on May 14, 2015. Photo by Craig Schreiner.

Some of the books she loves to teach include:
- "The Unheard" by Josh Swiller, a memoir by a returned Peace Corps volunteer that examines deafness, privilege, ability and disability in Zambia
- "I Beat the Odds" by Michael Oher, an autobiography about a man who made it through the Memphis child welfare system, sought out mentors and role models, and was strategic in improving his life, making it through college and to the NFL
- "Into the Beautiful North" by Luis Alberto Urrea, a novel and different kind of immigration story in which a young Mexican woman travels to the U.S. to convince people to move back across the border to strengthen the country

Karen Cano, a 2014 alumna who majored in Spanish education and is now a teacher at Milton High School, said that through Huss-Lederman's thoughtful reflections, she became a more open-minded individual.

"When I entered UW-Whitewater as a first-generation college student, I had many unresolved identity questions. I had doubts about who I was and where I fit in," Cano said. "Her guidance not only helped me in my personal life, but also in my professional life. I learned about the impact one teacher can have on a student's life. She certainly impacted my college career in many positive and unimaginable ways."

In 2015, Huss-Lederman received the W.P. Roseman Excellence in Teaching Award, UW-Whitewater's highest faculty honor. On June 10, she will receive a Teaching Excellence Award from Board of Regents, the highest faculty recognition from the University of Wisconsin System. 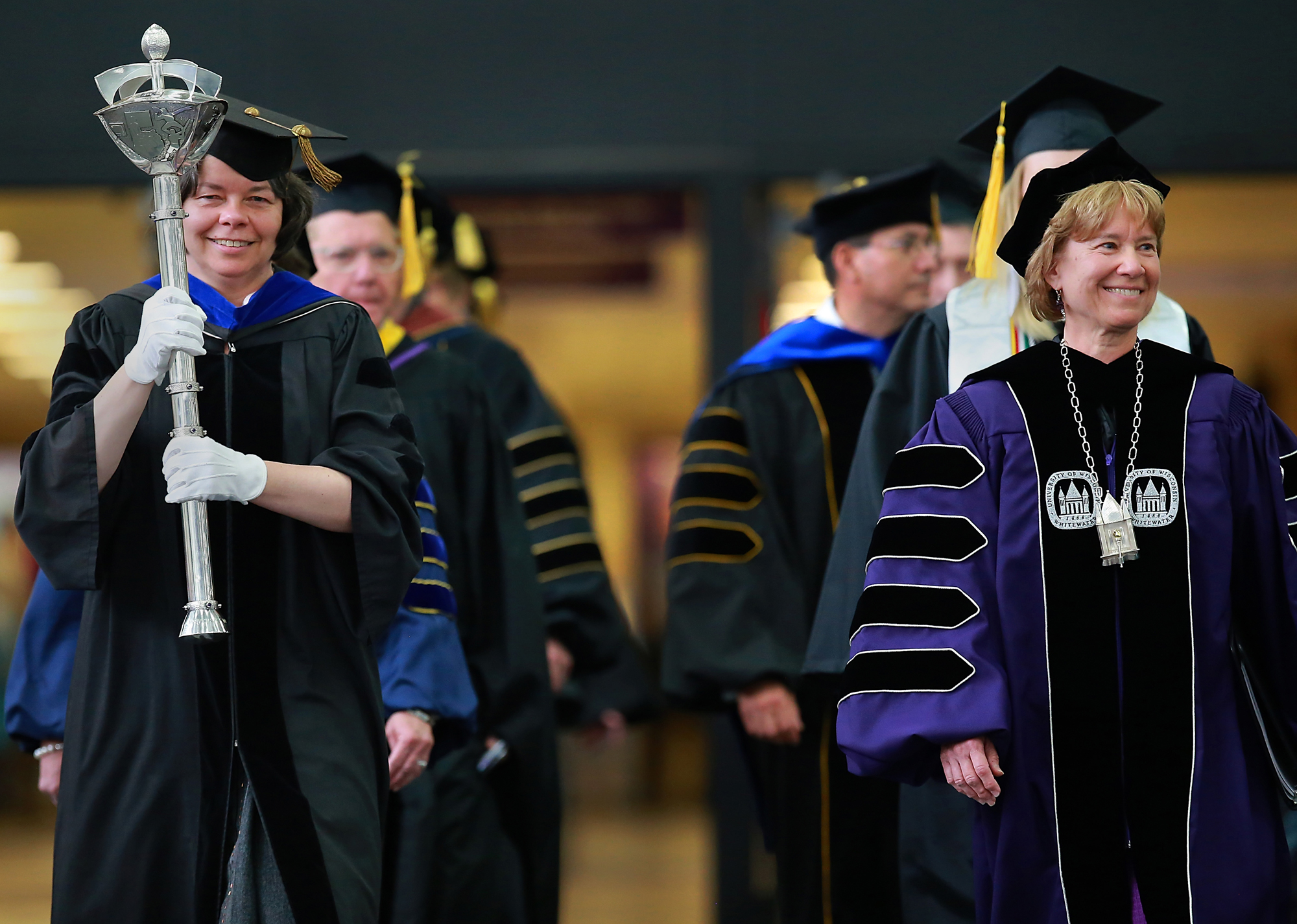 Susan Huss-Lederman, left, and UW-Whitewater Chancellor Beverly Kopper are side by side as they process in to Kachel Fieldhouse for commencement on May 14, 2016. Huss-Lederman was the 2015 W.P. Roseman Excellence in Teaching recipient and ceremonial Carrier of the Mace. Photo by Craig Schreiner.

She is one of the most successful grant writers in UW-Whitewater history, working with colleague Wallace Sherlock to bring in more than $6 million in federal grants to support teacher training in bilingual education and teaching English as a second language. She also developed a four-level curriculum for the UW-Whitewater Intensive English Institute, a program that welcomes international students and prepares them academically and culturally to enter the university.

Even before becoming a university professor, Huss-Lederman saw firsthand peoples' struggles and determination to better their lives through education — especially those for whom the "normal" education routes didn't work.

She taught English to Southeast Asian refugees fleeing the aftermath of the Vietnam War, and once volunteered to teach inmates at Lorton Reformatory, a maximum security prison near Washington, D.C.

Education is full of challenges, Huss-Lederman said. In nearly 30 years of teaching, she has seen her share of them.

"Perhaps the best lesson that we can offer our students is in how to live their lives with strategic optimism, strategic in that we examine how grit and determination have worked for them in the past and can work for them now, and optimistic because in looking for what works or what is effective, people continue to learn and develop, long after the classroom door closes."