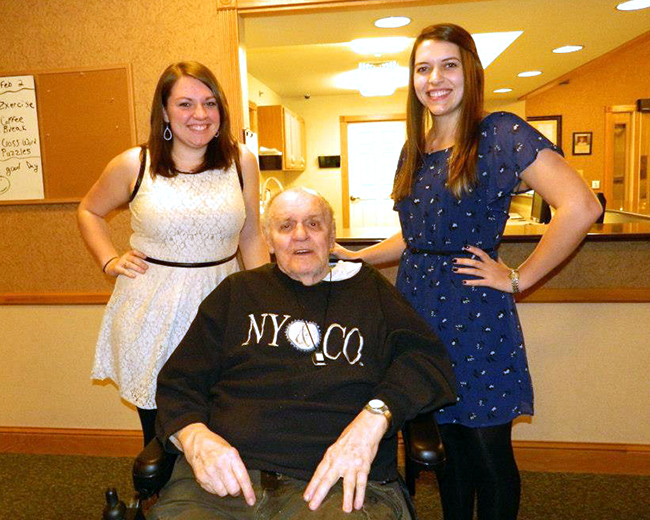 "He could be obnoxious," joked his sister, Nancy Murphy. "My brother had a very big mouth. Either you liked that or you didn't."

And when students from the University of Wisconsin-Whitewater came to visit as part of the school's Nursing Home Visitation program, few could handle Jeka for very long.

"He could be grumpy, but once you got to know him, he was a sweetheart," said Megan Kinney, accounting major.

And the students would eventually find out that Jeka -- a man who could be cranky and rough around the edges -- was incredibly thoughtful and generous.

Kinney and Anderson are roommates and seniors at UW-Whitewater. Anderson, from Sterling, Ill., initially joined the visitation program to receive extra credit in one of her classes, but enjoyed it so much, she decided to volunteer, along with Kinney, from Batavia, Ill.

"It can get lonely for the residents. You're taking a few hours to brighten someone's day," Kinney said. "It's supremely rewarding."

When they met Norbert Jeka two years ago, they saw through his rough exterior and decided to give the unique friendship a try.

"It was personal for us because Brittany and I lost three of our own grandparents in just a few years," Kinney said. "Norbert became our adopted grandpa."

Every Wednesday and Sunday, they made the trek to Milton to keep him company. The trio shared jokes, played card games and made crafts together. And, of course, the students spoiled Jeka -- surprising him with treats like pizza and licorice.

Jeka told the women stories about all the jobs he worked throughout his life -- barber, baker, cook -- even his time working at a cookie factory. He recollected his travels to Japan and France, and all the different cars he had driven.

"The friendship that developed was something I'd never seen before," said Nancy Murphy, Jeka's sister. "What I really admire is those girls listened to him and shared stories. They kept him company. He could be very difficult to talk to. It was so heartwarming." 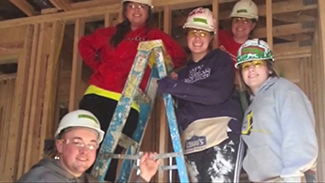 On occasion, Anderson and Kinney updated Jeka about their involvement in the Habitat for Humanity chapter at UW-Whitewater. Each year, during spring break, the pair travel with a contingent of about 50 Warhawk students to build homes across the United States. They've been to Bay St. Louis, Miss., Mobile, Ala., and Albany, Ga. (pictured). Two years ago, they helped construct a home in Elkhorn.

"Spring break week was one of the few times each year we would be out of town and couldn't visit Norbert, but he knew how important it was to us," Anderson said.

The food, the stories, and the visits abruptly ended in July 2013, when Jeka's health declined, and, at age 81, he passed away.

At his funeral, Kinney and Anderson learned things their older friend never shared: Jeka was a decorated Korean War veteran -- the recipient of a United Nations Service Medal, a Bronze Star and two Purple Hearts, earned when he was shot while saving a fellow soldier.

They also learned this: Norbert decided to change his will to give some money to "that Habitat place" they were always talking about.

"When Norbert's sister, Nancy, handed me the check for $50,000, I started crying," Anderson said. "I couldn't believe it. I was speechless. It's going to do a lot of good."

UW-Whitewater students work incredibly hard to raise funds for Walworth County Habitat for Humanity. Over the last few years, the students have raised, on average, $7,000 annually. Jeka's generous donation means a new home will be built in Whitewater this fall.

Kinney and Anderson still keep in touch with Murphy, and they are all looking forward to the day when groundbreaking on the new home begins.

"I hope somebody can benefit from this house because it came from a place of love," Murphy said. "I am so glad the girls will be able to help construct it. I'm in awe of the giving they do."