Art and music converge in Milwaukee exhibition with UW-Whitewater connections 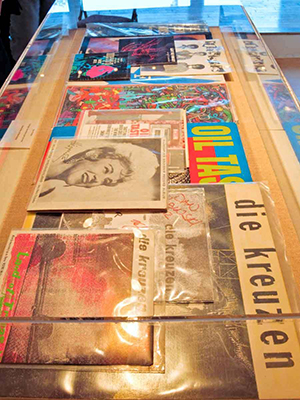 The posters that rock concert promoters stapled to telephone poles and taped to laundromat windows in Milwaukee decades ago had a purpose that ended on a Saturday night.

After that, these posters were ripped down by the cleaning crew or were papered over with other concert promotions. Or, the flyers simply succumbed to Milwaukee's weather.

But some of these posters escaped death, taken down and preserved in the closets and basements of collectors, musicians and fans. Michael Flanagan, director of UW-Whitewater's Crossman Gallery, researched examples of this work and was amazed.

"It was a revelation to me was how much time and energy and effort and artistry went into the production of these printed pieces that had a lifespan of about a week," he said.

Thanks to Flanagan, some of these old concert posters are getting a second run in the spotlight.

They are part of an exhibit in Milwaukee's Walker's Point Center for the Arts called "The Art of Music in Milwaukee," which celebrates the relationship between music and the visual arts.

Flanagan, a board member of the gallery, curated the exhibition, which features work from nearly 30 artists and collectors. Flanagan's concept for the show coincides with summer, the traditional peak of the music scene in Milwaukee.

In addition to posters, the exhibition features paintings, prints and other art connected to Milwaukee's musicians. The show also features creative work that's connected to the UW-Whitewater campus.

Kelsey Lawson, who graduated in May with a Bachelor of Arts in graphic design, contributed photos she's taken of disc jockeys and the Milwaukee club scene. Lawson is currently working in Milwaukee as the vice president of marketing and operations at SWARMM, an event production company. 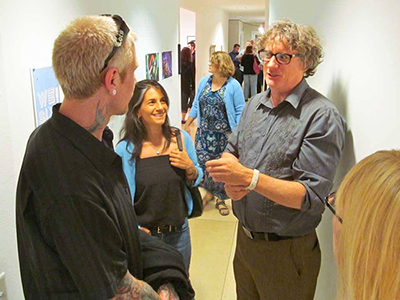 Dale Kaminski (pictured right), media coordinator for the College of Arts and Communication at UW-Whitewater, also contributed to the exhibition. Kaminski, who plays guitar and bass, performed in a number of Wisconsin bands in the 1980s and 1990s. He was part of the road crew for the Violent Femmes and he performed with the band onstage.

Kaminski's association with that iconic alternative band took him to the top of the music world. In 1994, he performed onstage at a Woodstock reunion before a crowd of 400,000. Another gig, a 1996 promotional effort for Molson Ice beer, took Kaminski and the Femmes to the North Pole, where they performed with the Red Hot Chili Peppers. Molson billed the show as the, "northernmost rock concert in history."

"I went around the world with them," Kaminski said. "I have a lot of fond memories."

Kaminski's memories of the music business live on in posters and original artwork that's he's contributing to the exhibition. He said concert promotional materials are becoming a lost art.

"People still make posters but in the age of the Internet, more and more advertisement is moving online," he said.

But Flanagan said he has discovered that if you look for it, the world is still rich with art that's connected to music.

"There is tons more stuff out there," he said. "I could do this show over and over again."

The exhibition runs through July 12. The gallery is open Tuesday through Saturday, noon to 5 p.m. and is located at 839 S. 5th Street, Milwaukee.