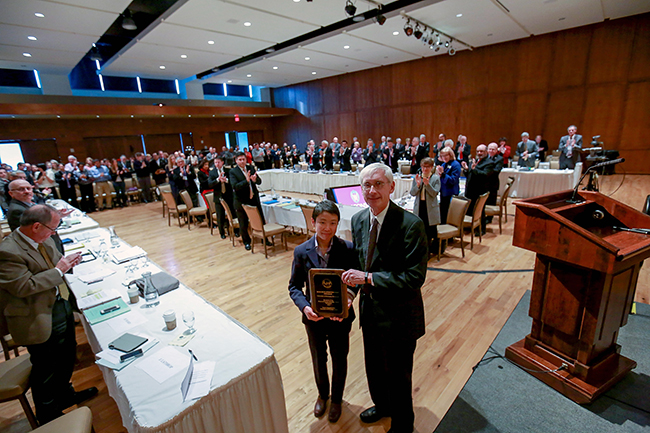 Catherine Chan, director of undergraduate research, receives a Board of Regents diversity award from state superintendent of public instruction Tony Evers at a UW System Board of Regents meeting in Madison, Wis. on Friday, Feb. 6, 2015. The award recognized the university's Research Apprenticeship Program.

Rachel Nabors' mind is sparkling with the possibilities. She can already see that her research findings have the potential for positive change.

The topic -- one that is personal for Nabors -- involves investigating best practices on mentoring, especially the most effective ones on underrepresented and minority students.

"I think about my own mentors, who have been very supportive academically, socially and spiritually, and now I'm reviewing firsthand accounts from students all over the Midwest."

Among the questions: What do successful mentor/mentee relationships look like? And how can universities replicate these practices so that all faculty and staff support students in ways that help them complete a college degree?

Nabors and her peer research partner, Dorshe' Jackson, are sophomores -- younger than most students who conduct research at UW-Whitewater. And that's precisely the point.

They're part of the Research Apprenticeship Program, an effort that began in 2011 and has served 193 students to date.

RAP students are paid assistants who work with faculty and staff members on research and scholarly projects. Through the yearlong experience, students design and implement surveys, collect and analyze data, and compile and review literature. 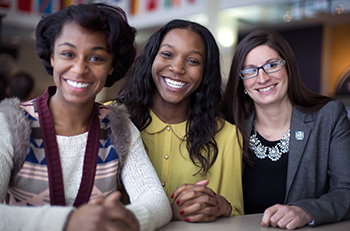 Nabors and Jackson are working with Courtney Luedke from the Department of Educational Foundations. She is part of the network of people at UW-Whitewater supporting these students in their academic and professional development.

Research can be an intimidating prospect for an undergraduate. Many have never attempted this kind of scholarly activity before, according to Luedke.

"It demystifies what research is and opens doors for students to conduct independent research and creative endeavors in the future," she said.

"The earlier we engage students, the more successful they will be," said Catherine Chan, director of the Undergraduate Research Program. "It allows younger students to learn about the tools of the discipline and eliminates the burden of having students come up with their own project."

The program is so successful, it was recently recognized by the UW System Board of Regents as contributing significantly to the educational outcomes of underrepresented student populations through engaging them in mentored research.

Nabors, a journalism major from Milwaukee, says the program has prompted her to think more critically and ignited a passion for the discipline she is researching.

"I'm envisioning ways I can be an advocate for African-American communities through storytelling, and looking at ways the education system can help students," she said.

For Jackson, an elementary education major from Plainfield, Ill., the research also revealed insights into her chosen field.

"Students don't always realize they have people who will support them in many ways. As a future teacher, it made me realize the importance of what I can do with my career."