More than 7,000 light years away, in one of the most ancient parts of the galaxy, a special star is about to get a close-up.

It's bright, rare and about 13 billion years old.

For Robert Benjamin, associate professor of physics at the University of Wisconsin-Whitewater, it's an ideal target as he continues his research into the cosmos.

And he'll have one of the greatest tools available at his disposal -- the Hubble Space Telescope.

Launched into orbit in 1990, Hubble is arguably the most famous telescope in the world. It beams back images and data that continue to capture the imaginations of generations of people.

Anyone can apply for time on the telescope, but competition is fierce. There is no shortage of scientists wanting to use it. Each proposal is critically reviewed, and in the latest round of proposals, only 208 of 884 proposals were accepted.

UW-Whitewater will have access to the telescope for a total of 21 hours. The first observation took place on Feb. 20.

"Most of the stars in the cluster we are observing are old and red," said Robert Benjamin. "Stars that are bright, blue and ultraviolet are rare and provide unique information about how stars eject their outer layers as they near the end of their lifetimes."

Five different stars in different clusters will be observed in the spring and summer. While Hubble is famous for its photography, Benjamin is not using the telescope to take pictures.

"We are getting an ultraviolet spectrum -- essentially a squiggly line. We will break the starlight into colors and analyze the light to measure properties of the stars and the interstellar gas between us and the stars."

Understanding this interstellar gas -- known as a galactic wind -- is critical to Benjamin's research.

"When galaxies form, tremendously powerful winds are blowing. I want to know the distance of this galactic wind and the speed with which it is flowing out of the Milky Way," he said. "This research may help us learn the fate of this galactic outflow."

Benjamin is no stranger to using the world's greatest technologies to advance his research. He is among a handful of scientists helping to map the galaxy using images from the Spitzer Space Telescope.

These high-profile, real-world research opportunities are irresistible for UW-Whitewater students. 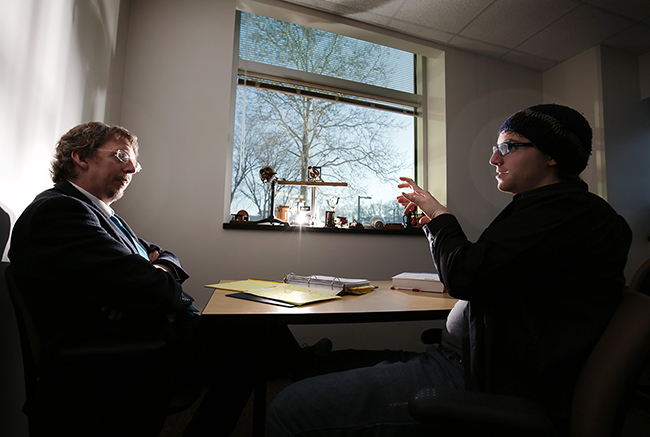 Andrew Eagon, a sophomore physics major from Racine, is euphoric about the Hubble project.

"The biggest kick is being able to say you are doing research for NASA," he said. "Not many students get that opportunity."

Eagon, who plans to go to graduate school and pursue a Ph.D., is already poring over data in NASA's archives. He applied for an undergraduate research grant from the Wisconsin Space Grant Consortium to continue his work with Benjamin over the summer. He hopes it will be the next exciting step in his education here at UW-Whitewater.

"During my freshman year, I had hands-on experience with a biophysics project and later worked on computer programming and computer systems. This project is more theoretical and involves number crunching," Eagon said. "It's Hubble. How can you not be excited?"