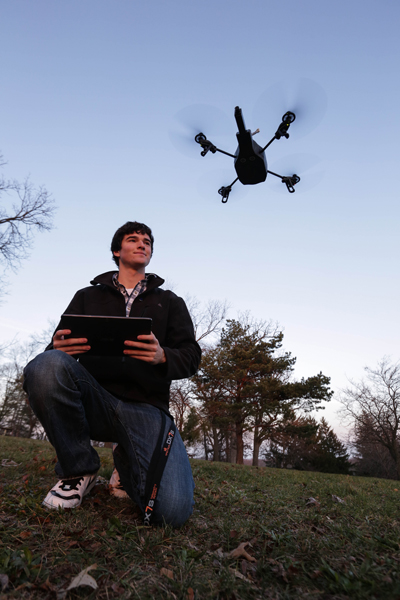 Without a doubt, Mitchell Fiene's invention is one of the coolest entrepreneurial ideas of the year.

His quadcopter - a four-rotor helicopter with a wingspan of two feet and equipped with a video camera - can be controlled with a few touches on his iPad.

It's not a new toy or a hobbyist pursuit, however.

Fiene, a University of Wisconsin-Whitewater sophomore, has taken his business idea to the skies after finding a solution to an arduous farming practice - crop scouting.

"People spend hours in the fields detecting insect infestations or analyzing nutrient-deficient plants. It's very costly and inefficient," Fiene said. "There had to be a better way."

The quadcopter flies over farmland, sending back live pictures of crops. An agronomist can review the video and make an analysis.

"Five years ago, this wouldn't have been a viable product," Fiene said. "Now, parts are inexpensive enough that it's affordable for farmers."

And with 15 million acres of farmland in Wisconsin - and scores more across the country - there are a lot of potential customers.

"We're looking at everyone from crop consultants to family farms to retail corporations," Fiene said. "Higher crop yields is the goal in the end."

A native of Prairie du Sac, Fiene has merged his passions for agronomy and video gaming to harvest more than just a helpful invention.

He's hoping to inspire a new generation of farmers and agricultural specialists in an industry that's rapidly aging.

The average American farmer is more than 58 years old, up from 39 years old in 1945, according to U.S. Department of Agriculture statistics.

"There are a lot of older folks in agriculture, and not many younger people to replace them," he said. "We want to get young people excited about this field and technology is the way to do it." 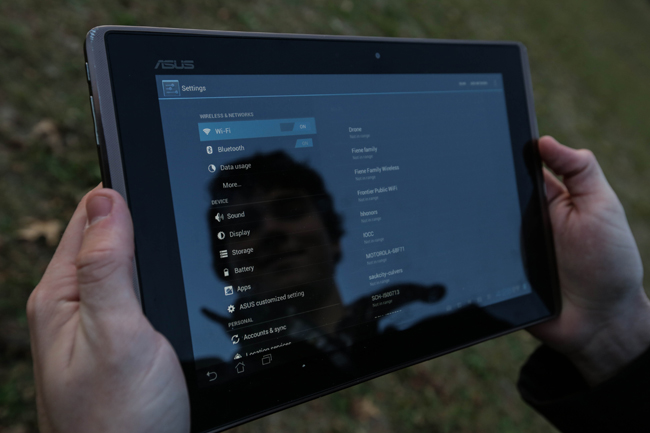 He's honed his product ideas and business plans with the help of experts at UW-Whitewater, where he's majoring in entrepreneurship.

"UW-Whitewater is a really great place to be. I like being able to connect with professors and mentors with real business experience," Fiene said. "They're there for you every step of the way, from pitching ideas to problem solving to introducing you to business plan competitions."

In November, Fiene participated in the National Elevator Pitch Competition in Chicago. The event, run by the Collegiate Entrepreneurs' Organization, is the largest of its kind in the nation, offering students a unique opportunity to pitch their business ideas to a panel of judges and win up to $3,500.

As a second place finisher in the 2013 Wisconsin Governor's Business Plan Contest, he's sure to get attention from investors. More than $100,000 will be awarded, including cash prizes, software, and accounting and legal services.

A second generation quadcopter is already in the works. Fiene said the focus will be on ease of use.

"One-touch launch. We want it to be able to fly itself," he said. "We envision future models could analyze soil, water, pH levels and more. If we could make it fly, we can make modifications to make it even better."