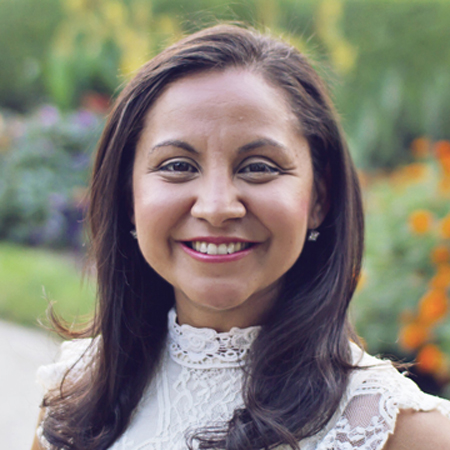 The University of Wisconsin-Whitewater is proud to announce that Sarahí Monterrey, who earned a bachelor's degree in education in 2002 and a master’s degree in 2003, has been selected as the university's Distinguished Alumna for Professional Achievement for 2020. Monterrey is an English learner teacher at Waukesha North High School.

The award recognizes Monterrey’s extensive career developing bilingual curricula and advocating for dual-language programs. She was named Wisconsin's 2018-2019 High School Teacher of the Year and selected as Wisconsin’s 2019 representative to the National Teacher of the Year Program, the first Latina in the state to earn this honor.

As a child immigrant from El Salvador who grew up in public schools, Monterrey, whose first name is pronounced sa-ra-EE, recognized early on the pivotal role teachers play in students’ lives. Her family immigrated to New York when she was 1, and lived there until she was 9. The family then moved to Waukegan, Illinois, and finally to Wisconsin. Monterrey attended Badger High School in Lake Geneva.

A visit to UW-Whitewater and the outstanding reputation of the university’s teacher preparation program, dating back to 1868, solidified her decision to become a Warhawk.

“For me it was a great-sized campus — I only had one or two lectures,” she said. “All the rest were the high school class size, fewer than 30 students. I loved being able to know my professors and know that they knew me by name. I loved the textbook rental, too — that you don’t have to buy books — and all of the other supports.”

“There were just so many support systems for students of color. It made my college experience so powerful,” said Monterrey.

“I’ll never forget Freda Briscoe, who ran the minority teacher program,” said Monterrey. “Freshman year I set up a meeting and sat down with her. She asked what my goals were, and I told her I wanted to graduate ASAP so I could get out there and teach. She went and wrote out a roadmap to all of my classes and gave it to me. I took summer classes, followed that plan, and graduated in four years, including doing my student teaching,” she said.

Monterrey was deeply involved as a student.

“I went to Miami on a travel-study trip during spring break one year to look at the learning and better understand the community. I was involved in Latinos Unidos on campus and worked with Admissions to visit regional high schools with Spanish-speaking students.”

And early on she laid the groundwork for what became a key opportunity in one of the local schools.

“I went to Whitewater High School when I was a freshman in college and introduced myself, asking if I could be of service,” she said. “So by sophomore year I was already able to start working there, helping students with homework, and getting to know the staff. I worked bilingually — even though there was no formal bilingual program at the time.”

She later completed her student teaching at the school. When Monterrey graduated, with a bachelor’s degree in secondary education and a minor in bilingual education, the high school’s principal, Vance Dalzin, an alumnus who earned a BSE in 1987, called with the opportunity to work as half-time as a Spanish teacher and half-time developing the school’s bilingual program.

While working at the school Monterrey earned her master’s degree and remained closely connected to campus, working with Upward Bound and eventually becoming assistant director of the university’s precollege programs for the summer of 2004. She also worked with Susan Huss-Lederman, professor of languages and literatures, on Project SWEETT, a program meant to help address a shortage of bilingual teachers in southeastern Wisconsin.

In 2008 she met and married her husband, Mario, and moved to Waukesha and began working at Waukesha North High School.

Over the course of the years that followed, Monterrey helped develop the school into a thriving, integrated learning community that now offers three levels of English as a Second Language, with staff who co-teach English, math, and science classes. She fostered a school culture in which EL students take Advanced Placement coursework, helping them gain college readiness skills. And the school became the first in the state to offer the Wisconsin Seal of Biliteracy awards, to recognize students who have demonstrated advanced achievement in bilingualism, biliteracy and sociocultural competence.

“My approach to teaching embodies my genuine belief that every student has the ability to learn and grow, and that every educator has an obligation to tear down the barriers that stand in their way,” said Monterrey.

As an active and committed advocate, Monterrey offers sessions on immigration policies and the impact those policies have on students. She leads professional development sessions to staff and parents throughout her role, focusing on serving EL students, on equity and on culturally responsive practices. She is the creator of Girl Talk, a club with a mission to inspire and empower students.

Throughout her career, she has kept her close ties to UW-Whitewater and has been able to share the positive experience she had on campus. She’s even brought her daughters Samari Monterrey, 8, and Marisa Monterrey, 6, to visit.

“In my role as an educator, I get to take students on campus visits and help them through the college admissions process,” said Monterrey. “Many of my former students have gone on to attend. When I tell students about UW-Whitewater, I always tell them it has to be the right fit. For me, the support system was phenomenal.”