At UW-Whitewater, we are focused on helping you make college affordable. Offering the best overall value in the UW System is a great place to start. Whether you’re new to the Warhawk family or you’re an established student — we offer hundreds of scholarships to help fund your education. The information on this site is valid for Fall 2022.

Choose a category below to get started: 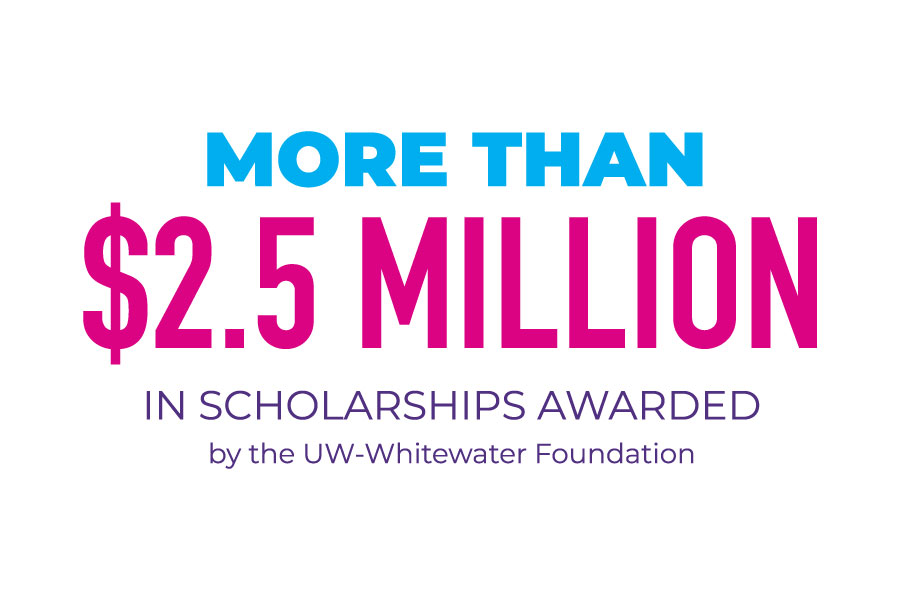 We take care of our Warhawk family. And that means you’ll not only find a supportive atmosphere at our university, but opportunities to apply for hundreds of scholarships reserved only for UW-Whitewater students.

New freshmen who have been admitted to UW-Whitewater by Jan. 1 of their senior year are automatically considered for academic scholarships based on merit. Scholarships are competitive and are awarded through a pooled process that is equitable to all students. Students with the best academic credentials based on unweighted GPA will be considered to receive merit aid.

Scholarship applicants must be first-time freshman who are traditionally underrepresented in undergraduate education. In addition, students with a 3.00 GPA or above are given priority. Special considerations are given to first-generation college students and students who have significant financial need.

Apply to be a King/Chávez Scholar

Welcome to Wisconsin! About 20% of UW-Whitewater students come from outside the state. If you are one of them, this information will help you understand the scholarship and tuition reduction opportunities available to you.

Students who meet the academic criteria outlined in the grid above will automatically qualify at the time of admission. These scholarships are renewable and valid for a maximum of eight semesters (fall and spring terms only). To renew this scholarship, you must maintain a 2.5 GPA as a UW-Whitewater student. Students who qualify for nonresident scholarships are eligible for additional scholarship opportunities, including the Chancellor’s Scholarship.

The MSEP is a discounted tuition rate available for students who meet the academic criteria. The MSEP rate is equivalent to 150% of the tuition a Wisconsin resident would pay, an estimated savings of $5,722 for the 2021-2022 academic year. Students from outside of MSEP-eligible states (Indiana, Kansas, Missouri, Nebraska, North Dakota and Ohio) who qualify based on GPA will receive a $6,000 nonresident scholarship.

This legacy program offers a discount to nonresident students who have a parent, grandparent or legal guardian who received a degree from UW-Whitewater. Students who qualify for this program and one of the above nonresident scholarships will receive the offer that most benefits the student. Students cannot receive both.

UW-Whitewater students are eligible to apply for hundreds of scholarships — worth more than $2.4 million — each year through the UW-Whitewater Foundation or through their college or major. Returning student scholarships are often made possible by the donations of generous alumni who want to give back to current Warhawks.

Our friendly staff is here to help you navigate the scholarship process.

New freshmen: Please email uwwadmit@uww.edu to be connected with your admissions counselor.

Transfer students: Please email transferadmit@uww.edu to be connected with a transfer admissions counselor.