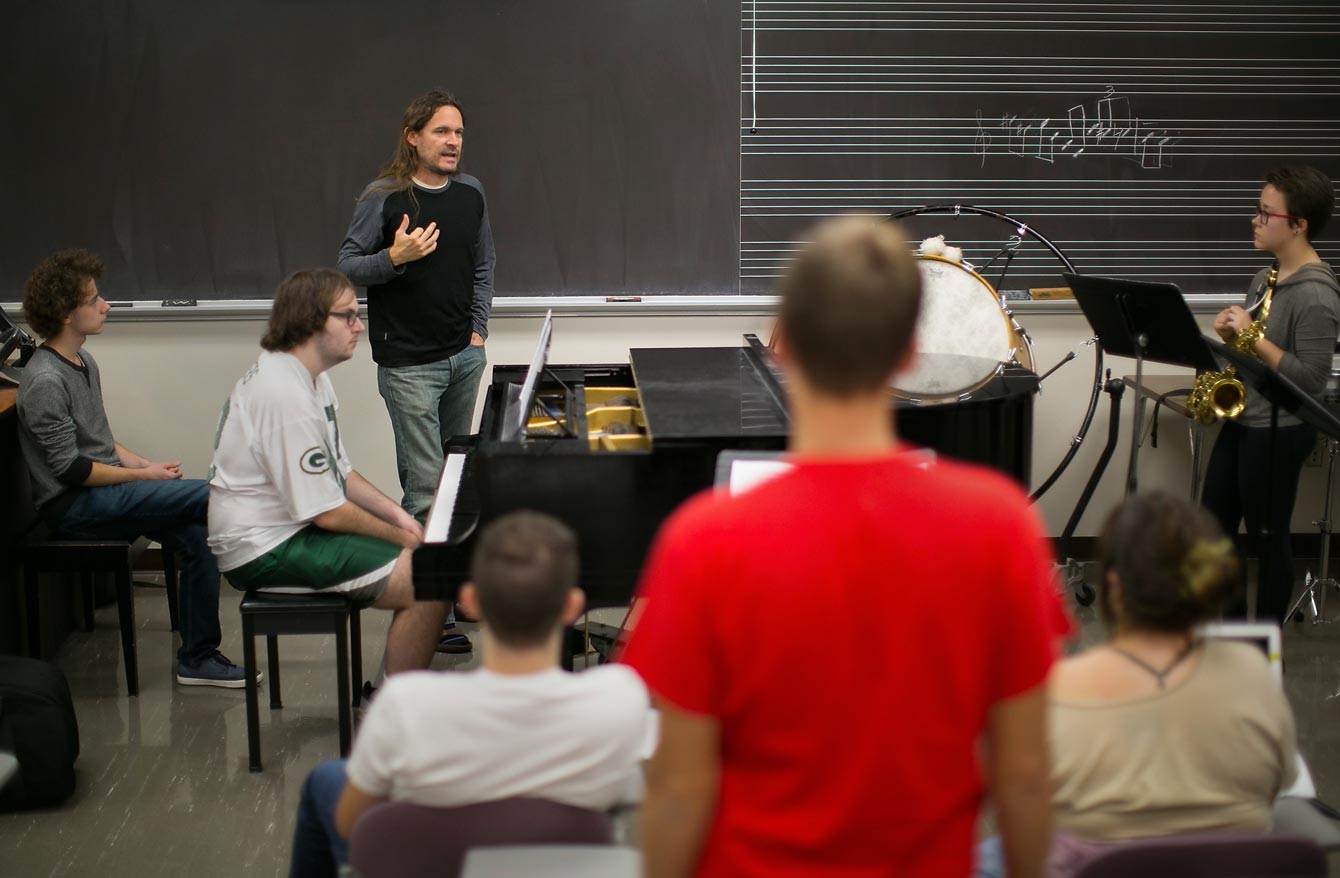 UW-Whitewater music professor Jeff Herriott works with students on their compositions in his office and in the classroom at Greenhill Center of the Arts on September 27, 2017.

You might expect the soundtrack of a violent, action-crime thriller to feature dramatic, instrumental music. Not this movie.

"Brawl in Cell Block 99," which opens in select theaters and on demand on Friday, Oct. 13, uses 1970s-style soul music to help drive the narrative.

The movie includes seven original songs co-composed and recorded by University of Wisconsin-Whitewater professor Jeff Herriott and performed by faculty and Warhawk alumni, along with classic R&B singers Butch Tavares and Rock & Roll Hall of Famers, The O'Jays.

Herriott and the film's director and co-composer Craig Zahler previously collaborated on the soundtrack for Zahler's film, "Bone Tomahawk," which was released in 2015 and starred Kurt Russell.

"Craig picked this genre for "Brawl" because he felt that '70s soul songs are strongly connected to peoples' emotions," Herriott said, and the music gives moviegoers insight into the characters' emotions and intentions with the lyrics at times speaking in place of dialogue.

Vince Vaughn stars in the movie as a recovering alcoholic sent to prison after a drug deal. When his pregnant wife is kidnapped, he must find a way to save her. Jennifer Carpenter and Don Johnson play Vaughn's wife and prison warden, respectively.

Herriott performed on keyboards, guitar, and percussion for the soundtrack and enlisted other faculty from the UW-Whitewater Department of Music including Cristina Ballatori (flute), Frank Hanson (trumpet), and orchestra conductor Chris Ramaekers (backing vocals).

It was a particular thrill for Herriott to work with legends like The O'Jays and Butch Tavares on the project.

"I flew out to Las Vegas in the spring to work with The O'Jays — that was definitely one of the highlights for me," Herriott said. "They were improvising off one another, almost effortlessly — a skill gained from having been together for 60 years."

Herriott himself mostly composes contemporary classical music, though his work in the past few years has ranged in style from indie rock to heavy metal and experimental improvisation. At UW-Whitewater, he coordinates the Media Arts and Game Development program and teaches courses in music composition, music technology, and a theory course focused on sound and media that is also part of the film studies program.

"Collaborating on this project gave me a much better understanding of how producers and directors think about the connections between film and music, which helps in my teaching" he said. "For example, discussing the impact of using trumpet in a particular scene instead of violin — and whether that's the right or wrong choice for the mood they're looking to create."

When "Brawl in Cell Block 99" premiered in Venice, Italy, in September, Herriott was there on the red carpet as the songs played outside and the cast and crew walked into the theater.

Herriott warns that the film is quite violent, and may not be to everyone's taste, "but the soundtrack is a full album experience that I can certainly recommend to everyone."