SHOT — one continuous piece of film footage, ending with a cut to the next shot.

SEQUENCE — series of shots combined to represent a discrete set of actions or a coherent narrative section.

MOTIF — anything repeated more than a few times in a film. A motif can be visual (an image or film technique), sonic (a sound or piece of music), or rhetorical (a word, phrase, metaphor, etc.).

TROPE — a common convention repeated in many films. A symbolic visual, auditory, or narrative element with a predictable meaning.

CINEMATOGRAPHY — a term used to define the ways in which the camera captures the shot. Under the heading of cinematography, we speak of such things as the different lenses used by the camera, how the camera frames the shot, the angle of the camera relative to the action, and how the camera moves.

EDITING — refers to how the individual shots are spliced together. The norm here is "continuity editing," in which shots are put together to achieve narrative continuity—to make the action appear to flow logically and naturally from shot to shot.

MISE-EN-SCÈNE — literally meaning "put into the scene," this term refers to the arrangement of actors and objects in front of the camera. Setting, lighting, costuming, and acting are aspects of mise-en-scène.

CUT — An immediate transition from one shot to the next, with no dissolve, fade, or wipe. Straight cuts usually imply continuous action between one shot and the next.

DISSOLVE — A shot slowly disappears at the same time the next appears, featuring a time during which one shot is briefly superimposed on another. Dissolves usually imply some distance in time or space between one shot and the next.

WIPE — one shot "wipes" another from the screen, usually from one side of the screen to the other, bottom to top, or top to bottom. Expanding or contracting shapes (such as stars, circles, or hearts) can also be used to "wipe" one shot from the screen and reveal the next. 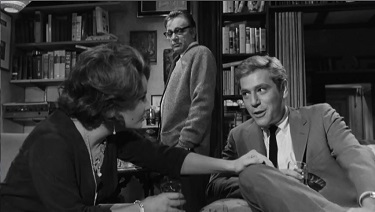 COMPOSITION — the arrangement of subjects, props, and environments within a given shot