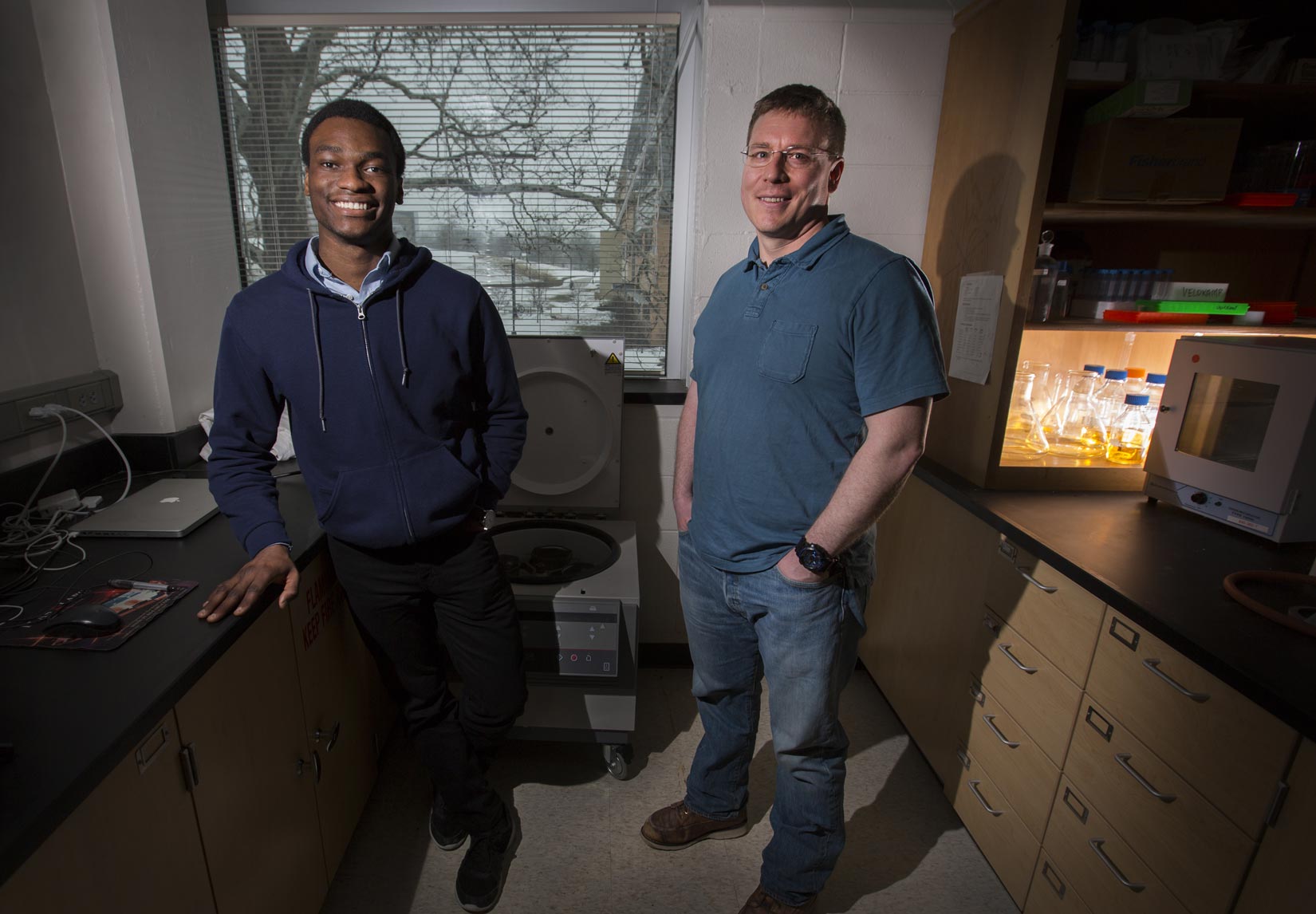 At last, it was the final Friday of March.

There had been a countdown in the Chemistry Room, that second-floor enclave off the main staircase of Upham Hall on the UW-Whitewater campus where students go to study and work out equations together. Everyone knew the prestigious Goldwater Foundation awards would be announced on March 30.

The arrival of spring break that week disrupted the anticipation, but junior chemistry major Pontian Adogamhe stayed in town with his uncle. They live together in Whitewater. And so on the appointed day, Adogamhe was on the Goldwater website and searching the results for his name.

"There were so many students trying to check," he said. "I went onto the Facebook page because Facebook doesn't crash very often. (Alphabetically) I knew (Whitewater) was going to be on the last page."

And there it was: HM (for honorable mention), Adogamhe Pontian, University of Wisconsin-Whitewater. Had he been on campus, Adogamhe said he surely would have screamed and shouted.

"My uncle was at home and I told him I got honorable mention, and it was all tears of joy at that time," he said.

Adogamhe describes the application process as a journey he would never have finished without help from friends, UW-Whitewater faculty — especially the university's Goldwater Scholarship review committee — and his principal mentor, Associate Professor Christopher Veldkamp.

The journey began last summer when Adogamhe began working on his undergraduate research project as a Ronald E. McNair Scholar. The McNair program, which prepares traditionally underrepresented undergraduate students for postgraduate studies, emphasizes research and scholarly activities. The program supported him for the summer, gave him a solid start and it got him thinking about working on a Goldwater entry concurrent with his research. 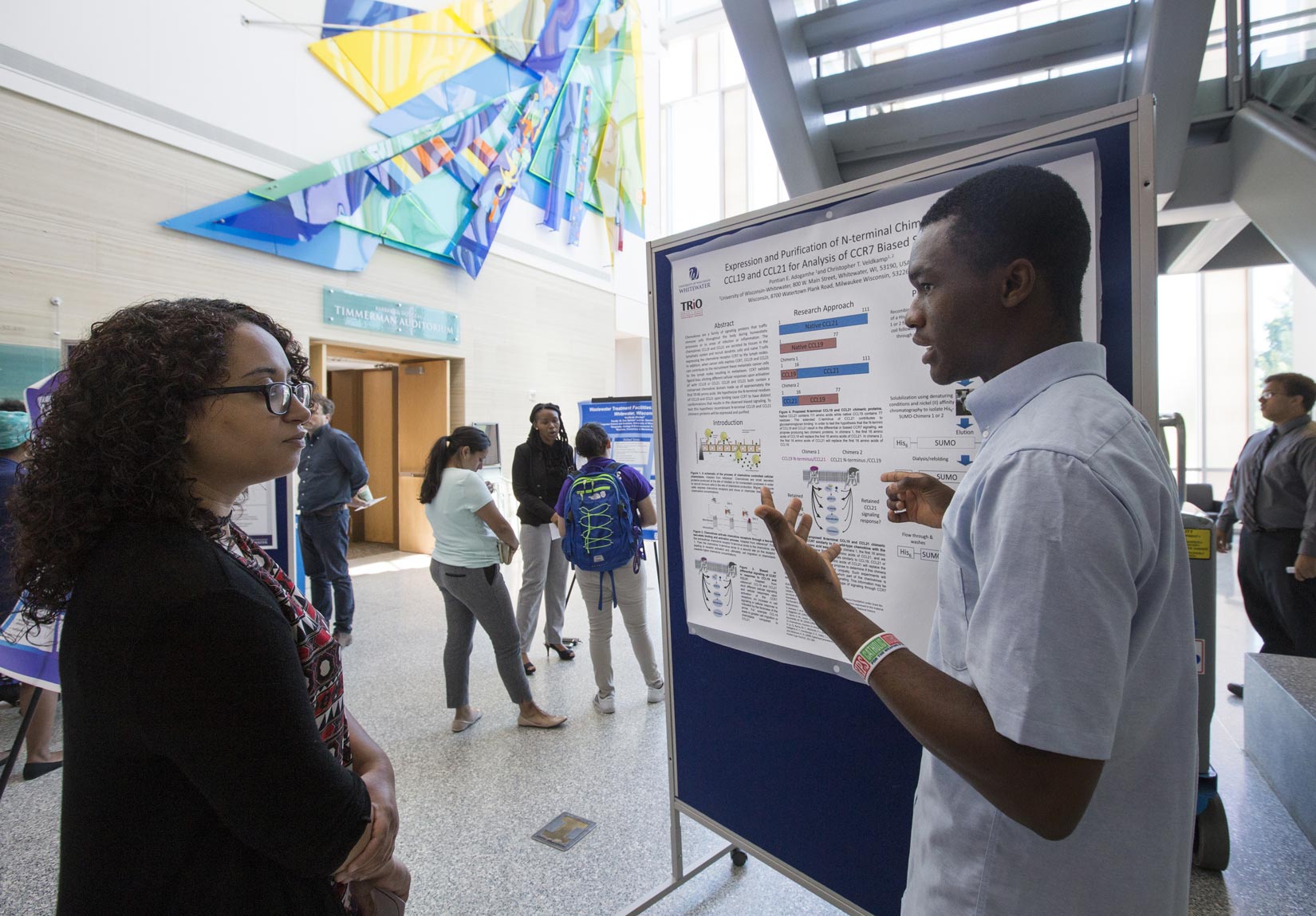 "I talked with Dr. Veldkamp and he told me there are a lot of expectations (for the Goldwater application) and I had to be 100 percent — not 99 — but 100 percent committed to the whole process," Adogamhe remembers. "I had to work hand-in-hand with my mentor."

Veldkamp has made this journey before. One of his protégés, Andrew Phillips, won a Goldwater Scholarship in 2014. And considering the difficulty of Adogamhe's project, Adogamhe was not likely to go it alone.

Adogamhe and Veldkamp are looking into the immune system highway where proteins, particularly chemokine proteins, regulate the travel of immune cells from one location in the body to another.

"The portion (of study) I am involved with is cancer research because they (chemokines) are involved in the immune transport," Adogamhe said. "Two of the chemokines that were part of my study are actually involved in the metastasis so instead of trafficking immune cells, they are trafficking cancer cells."

In order to do studies like these, scientists need the chemokine proteins. In chemokine production, DNA is introduced into host cells. Through a combination of scientific procedure and "tricks of the trade," as Veldkamp says, the host cells become protein factories. The scientist's job is then to isolate the desired protein from a stew of cells, lipids, DNA and other proteins, and purify the protein to a very high degree.

Veldkamp said the technology of making recombinant proteins for study has been around for a long time. But UW-Whitewater researchers have found a niche by producing variants, or mutant chemokine proteins, which are not economically viable to produce commercially. These variants can be extremely useful to medical researchers.

"What we're doing lately is making a lot of different variants of these chemokines that turn out to be helpful for our collaborators," he said. "If you want to test a certain hypothesis, it's nice to have a mutant or a variant as a way of addressing your hypothesis. It allows them (researchers) to further their own research and hypotheses." 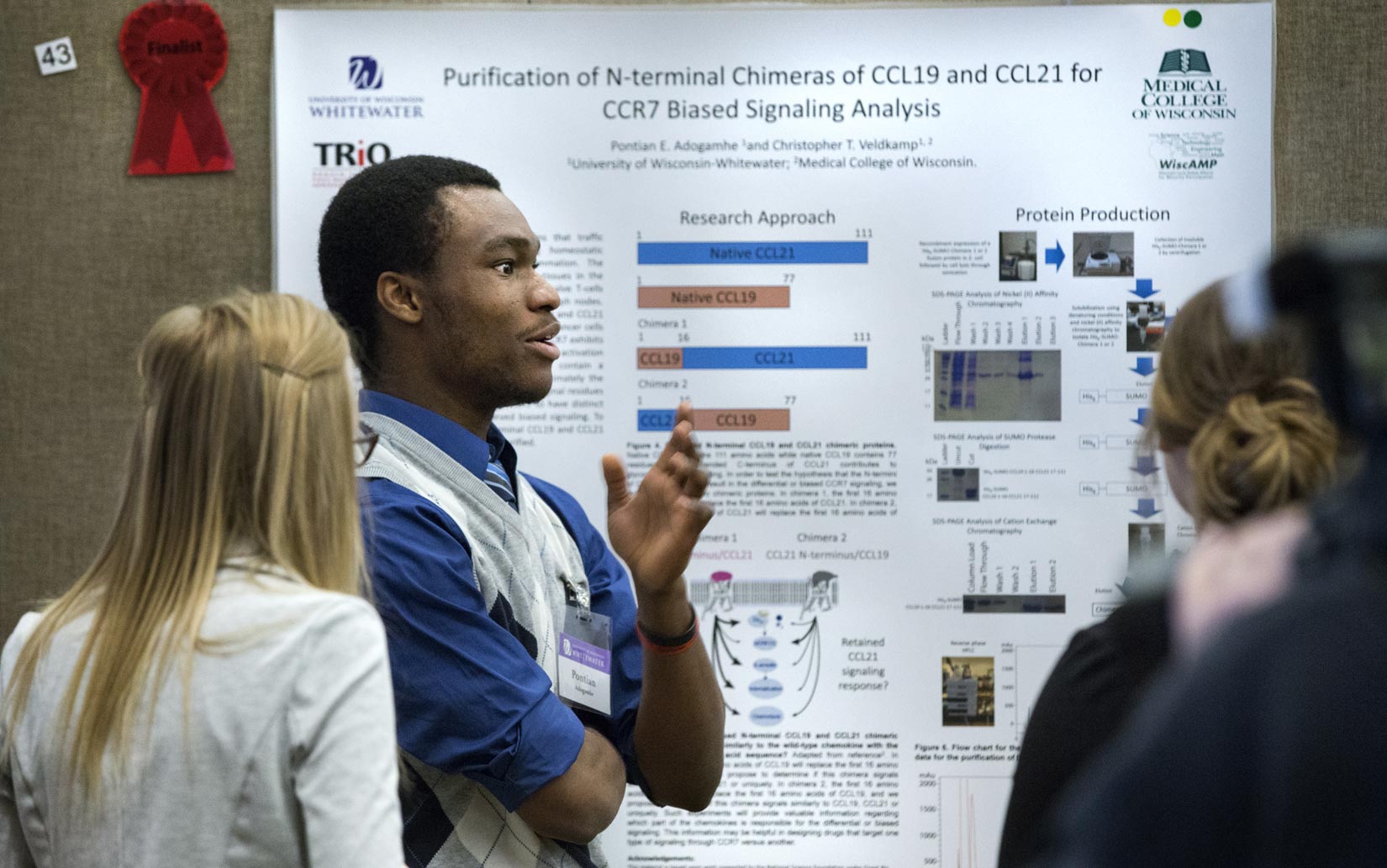 Chemokine proteins from UW-Whitewater are in use by researchers worldwide. Veldkamp, who said he got into teaching to help students and to make a difference, sees this as a difference-maker.

"A student is going to learn all of these techniques about recombinant protein production, and that's a multi-billion dollar industry," Veldkamp said. "It's stuff they can take with them and general techniques they can use elsewhere in a biochemistry lab, and then they're also contributing to real-world research.

"They're making a chemokine variant or a mutant that nobody's ever made before and that some other researcher is going to do a bunch of experiments on," he added.

Adogamhe would like to pursue a medical research degree in tropical medicine and infectious diseases, specifically the study of malaria. He said tropical diseases often reach epidemic levels due to insufficient research and a lack of awareness in the developed world. He would like to help change that.

When he saw the Goldwater awards announcement with his name, Adogamhe said he thought of those he leaned on during the application process, especially friends and fellow applicants who helped him. The student applicants had agreed in advance that an award for any one of them would be considered an award for everyone.

"It was a journey all of us started together and we experienced together," he said. "And we were going to finish it together."