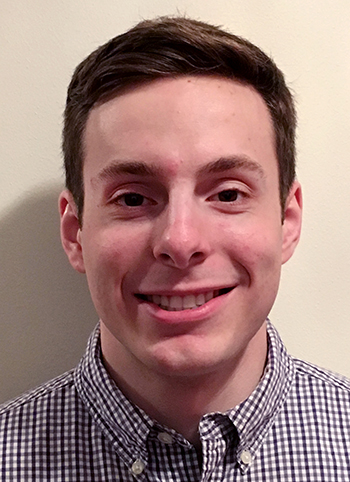 University of Wisconsin-Whitewater student Matthew Schulgit is among only 396 students in the United States — and eight in Wisconsin — to have been awarded a prestigious Barry Goldwater Scholarship in 2020 from among 1,343 natural science, engineering and mathematics students competing for the honor.

A Brookfield native who will graduate from UW-Whitewater in May 2021 with degrees in biology and Spanish, Schulgit plans to become a family doctor and medical researcher.

Schulgit is one of four UW-Whitewater students to have earned the honor. Chemistry majors Marie Nider and Andrew Phillips won in 2012 and 2014, respectively, and geology major Melanie Sorman won in 2016.

To earn the award, students must be recommended by a faculty member, gather endorsements, write a research essay, assemble detailed applications and materials and, finally, be endorsed by a faculty committee.

“Through the application you have to write essays to explain what you want to do in a concise way that people outside of your discipline can understand,” said Schulgit. “It served as a very important learning and practice opportunity for when I apply for professional programs in the future.”

The federally endowed scholarship was created to encourage students to pursue careers in natural sciences, engineering and mathematics. An individual scholarship bestows up to $7,500 to be used for tuition, books, fees and room and board.

“The scholarship allows me to focus more on my research because it’s a very generous financial gift from the foundation,” said Schulgit.

He describes UW-Whitewater as his first choice when it was time for college. For one, his brother Jimmy went to school here. He would be far enough from home to live on his own but not too far from family. He could talk directly with his professors and they would remember his name. He would be treated as a person, not a number. He would belong to a community.

Schulgit first was recommended to apply for a Goldwater Scholarship by Associate Professor of Biology Kirsten Crossgrove, who has been his faculty mentor on a project, with global health implications, through the university’s Undergraduate Research Project.

“One of the great things about UW-Whitewater is that we get students like Matthew who come here when they easily could have gone to bigger-name schools,” said Crossgrove. “They benefit from the individual attention, and we benefit from getting to work with amazing students.”

Crossgrove and Shulgit’s research focuses on a protein, a parasite and a debilitating sickness the parasite causes in millions of people in south and southeast Asia. The cellular protein they are studying works like an on/off switch in the growth of Brugia malayi, a kind of roundworm that uses both mosquitoes and humans in its life cycle. If the protein can be switched off, the parasite will not be able to develop enough to infect people.

Schulgit said past scholarships have given him freedom and time to focus on school and family instead of outside jobs to pay the bills. He has received UW-Whitewater Foundation and Chancellor Scholarships. He also received a year of funding for his research through the Research Apprenticeship Program at UW-Whitewater.

For Schulgit, there is inspiration at home for a career in medicine. His brother Jimmy, older by two years, graduated from UW-Whitewater in 2019 with a degree in Spanish and a minor in biology. Now, Jimmy is in medical school in Missouri. Their mother, Sandra, is a retired registered nurse and their father, James, is a cardiologist at Aurora St. Luke’s Medical Center in Milwaukee.

The many-faceted Schulgit served in Whitewater Student Government before being named in August to fill a vacant seat on the Whitewater City Council. He is running unopposed for a full term in the April election. In high school, he began volunteering at Aurora St. Luke’s, assisting the admissions office with gathering information and generally being a friendly face for families of patients. He also has volunteered as an English-as-a-Second-Language tutor through the Milwaukee Archdiocese at Prince of Peace, a church on the south side of the city.

Schulgit paints a picture of his future as a family doctor in a Wisconsin community near a research hospital. He wants to be a part of a community as a doctor, an elected official, a volunteer and, most of all, a servant. More than a career, he wants a life. He calls it “giving back.”