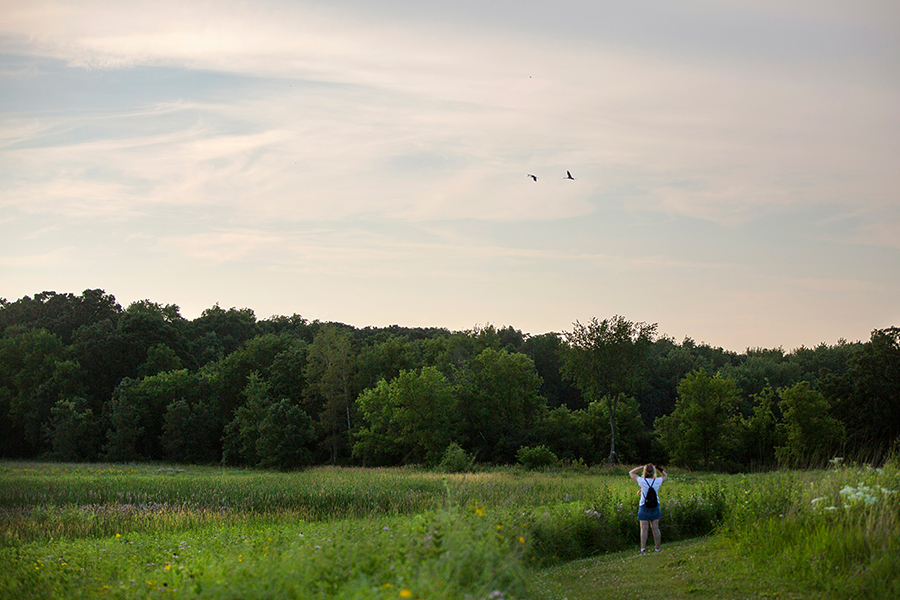 White clover blossoms spread carpetlike as Emily Peters and Ashley Roscoe walk one of the grassy trails through the prairie at the University of Wisconsin-Whitewater Nature Preserve. As student workers, they know the prairie well — they pause to pull the occasional weed and to indulge their sense of wonder.

A movement in tall grass next to the trail catches Ashley’s eye and she pounces, untroubled about grass stains to her bare knees. She cups her hands around an unseen quarry but comes up with only clover blossoms. She sifts again, and there it is. A frog, tan and tiny as a fingernail, scrambles to get away. After inspecting the frog and showing it to Emily, Ashley lets it go. It burrows into grasses, incognito once again.

Off the trail, bright prairie flowers and wavy grasses taller than a person extend down a slope toward a pond as two cranes fly above. Almost as invisible as the frog and interspersed with the beauty is a small blue flag marker. Approaching it, the students kneel, pull back plants competing for sunlight, and reveal a small swamp milkweed. This is the reason they are here.

Milkweed is like a tree of life to the monarch caterpillar, and it benefits many other pollinators as well.

“Over the past year, we did our campus Sustainability Month based off of pollinators,” said Emily, a biology major from Sussex, who then was a student worker in UW-Whitewater Sustainability. “We did an ‘Importance of Pollinators’ display in the library and other events. Much of it was to promote a (honey)bee hive, which we now have on (the far eastern edge of) campus, but also other pollinators in this area because so many of them are at risk.”

In the unforgiving arithmetic of nature, pollinators equal our survival. In June 2019, Secretary of Agriculture Sonny Perdue declared a “National Pollinator Week” to raise public awareness about crashing pollinator populations. Pollinators — bees, butterflies, myriad other insects, birds, bats and even animals — are a vital part of agricultural production for the global food supply.

Emily led the effort to win a Monarch Waystation designation for the prairie from Monarch Watch, a nonprofit organization dedicated to education, conservation and research for the monarch butterfly and other pollinators.

“I found the Monarch Waystation program a while ago,” she said. “I was looking into them because of the campus garden, but then I saw that they do the grant program for reconstruction of prairies for pollinators. I thought, ‘Oh my gosh, that’s perfect!’’

To earn the designation, she applied for a grant and won a contribution of several hundred plants representing a $1,000 in-kind donation to the university. Emily remembers traveling to campus as a child with her mother, then a nontraditional student working on an art degree. Winning the contribution for the place which became a second home when she was a child felt especially good.

“Because of the size of our prairie, we were able to get 400 milkweed plants,” said Emily, who coordinated the planting and marking of the plants. “They were from a nursery in Broadhead, so they are local genotypes as well.”

While common milkweed was already abundant on the prairie, the new plants will add to the wealth for pollinators and further the restoration effort.

“Monarchs are the one recognizable figure that everyone wants to help,” said Wesley Enterline, sustainability director in the campus Facilities, Planning and Management Office. “But by helping monarchs, you end up helping a lot of these other pollinators at the same time.”

Emily now is a restoration intern for the Wisconsin Department of Natural Resources in the Southern Unit of the Kettle Moraine State Forest. She plans to continue her plant management work in the fall as Ashley, now a sustainability intern at UW-Whitewater, develops trail maps and interpretive signs to tell visitors about the prairie habitat. Both will work with Josh Kapfer, an associate professor of biological sciences, who will advise Emily on plant selection and Ashley on interpretive information for her signs.

Ashley, who has taken over checking on the milkweed plants, also runs a stream monitoring program and works in the campus garden. Both Warhawks are links in a chain of dedicated student workers who leave their mark at the university by helping to monitor stream quality, grow food, harvest and sort prairie seed and create and staff educational programs.

Enterline said the current prairie restoration, which is located east of the Nature Preserve’s pond, is about 30 acres, leaving around 50 more acres for restoration. The prairie has become an outdoor classroom for many campus academic classes and projects. Cross-country runners practice on the trails. The public is welcome to experience its trails as well.

“The management plan will be an ongoing thing,” he said. “Ten years in the life of a prairie is nothing. This will outlast all of us, hopefully.”