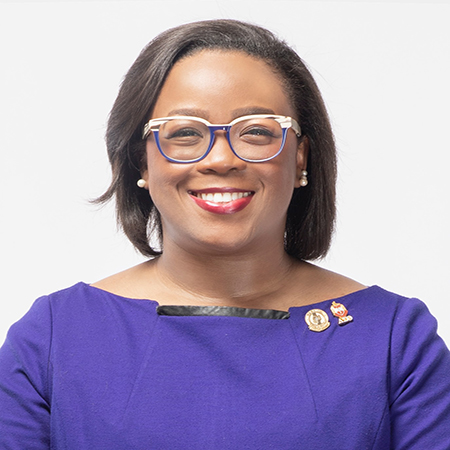 The University of Wisconsin-Whitewater is proud to announce that Sydney Nelson, who earned a BBA in accounting in 2013 and a Master of Professional Accountancy in 2014, has been selected as the university's Outstanding Recent Alumna for 2020. Nelson is a senior internal auditor for Advocate Aurora Health in Milwaukee.

The award recognizes Nelson’s personal and professional commitment to mentoring others, her leadership and her focus on teaching financial literacy skills to the various communities she serves, including in her role as president of the Milwaukee Chapter of the National Association of Black Accountants, Inc. and education committee member of SecureFutures.

As a high schooler, Sydney Nelson knew she wanted to study accounting in college. A basketball player — and captain of her team at Brown Deer High School — she was recruited by a number of public and private schools with women’s basketball teams and strong accounting programs.

“My heart was set on going down to one of those private universities. I went through the recruiting process and applied, and then I looked at the financial aid packages and had a very real conversation with my family about it,” said Nelson.

Her father encouraged her to talk to friends and family members who had graduated from private universities and were saddled with debt.

She came to UW-Whitewater on a basketball recruiting visit in 2009, but soon shifted gears, realizing becoming a basketball player wasn’t a lifelong dream. Instead, she started to look at the academic and leadership opportunities on campus, scouring the website for ideas that she soon crafted into a list of everything she wanted to accomplish during her college years.

“Almost immediately, I found out about all these precollege programs,” she said, like the Summer Business Institute, a summer enrichment program designed to help students of color who were interested in majoring in business successfully transition from high school to UW-Whitewater. “Soon, I had a list, and I had a plan.”

That plan would take her far.

In addition to the Summer Business Institute, she participated in the King/Chávez Scholars and ULead programs, all prior to stepping foot on campus as a true freshman. She’d return as a tutor and counselor for all three programs in the subsequent summer. She also worked as a resident assistant, as a campus assistant giving tours, and as a Warhawk Ambassador. And she was a leader of the collegiate chapter of the National Association of Black Accountants, Inc., and the Black Student Union, and she became a member of Delta Sigma Theta Sorority, Inc.

She immersed herself academically as well.

“Accounting professors like the late Dr. Gruber were huge mentors to me. In my final year, he asked if I would lead the college’s high school accounting outreach program. So, I created a team, the materials, a schedule, and we’d go to high schools throughout Wisconsin and talk about the accounting profession and UW-Whitewater,” she said.

“Dr. Denton Marks, my honors microeconomics professor, changed my trajectory,” said Nelson. “I’d wanted to go to London to study abroad, and he asked if I had experience with a second language. It didn’t dawn on me until that conversation that it would prove to be more advantageous to develop my Spanish language skills.”

On campus, Nelson was involved with the international student association and participated in travel study trips to China, Ghana and Brazil, the latter two focused on African culture, education, and history.

As she looks back, Nelson highlights the many opportunities she was offered through UW-Whitewater.

“I’d like to say it was eye-opening and exhilarating,” she said. “Going to conventions and conferences, earning scholarships — so many doors opened for me because of the people I came to know at UW-Whitewater. It was great to have that sense of independence but also be part of a community.”

Nelson would intern four times with the Milwaukee office of accounting firm PriceWaterhouseCoopers, including during her stint in Mexico.

After she served as student speaker at spring commencement in 2013, she continued her relationship with PwC. In her professional role, she was given opportunities to give back that tapped into the early budgetary acumen she displayed when considering her college options.

“The company had a national program on financial literacy, and our office used it to create a day-long office volunteer opportunity with local youth. We really focused on helping the students learn the concepts that would help them in many of their upcoming financial decisions.”

Nelson also works with the not-for-profit SecureFutures, where she’s taken time to present various financial literacy topics to high school students, and participated in a mentorship program called Money Coach, where she would meet with a group of five students every other week for a semester. She teaches others through her sorority, her church, and her work for various organizations in a financial role.

“I teach people what the numbers mean and how we can utilize them to understand past performance and how to make the right decisions moving forward,” she said. “I am almost in a constant teaching mode.”

Nelson has been a member of the National Association of Black Accountants since high school, and remains an active member of Delta Sigma Theta Sorority, Inc. She also joined Big Brothers Big Sisters of Metro Milwaukee and was matched with Arieahna — the two will celebrate four years of being together in the fall.

When reflecting on her time at UW-Whitewater, Nelson said, “I had so many mentors, and they’ve all taught me something different or influenced my path in some way. Ms. Freda Briscoe was coordinator of the Summer Business Institute, among other things, and she taught me about professionalism. And Ron Buchholz, Kim Clarksen, and Jan Bilgen from Career and Leadership Development taught me so much through my work with ULead and Greek Life.”