All are welcome to attend a ceremonial naming celebration for Ma’iingan Hall, the new student residence hall nestled into a hill on the north side of the University of Wisconsin-Whitewater campus. The event is at 2 p.m. Wednesday, Oct. 13, at the hall, located at 451 Warhawk Drive.

In the Ojibwe language, “Ma’iingan” means “wolf.” In Ojibwe culture, the wolf serves as guide and teacher, an example of perseverance, intelligence and fidelity to family. It is commonly pronounced on campus as “my-IN-gan.”

The name resulted from one person’s desire to learn.

Frank Bartlett, executive director of housing, is one of those people who is fully aware of the great gifts that come from working at a university. Whenever he can, Bartlett attends guest speaker events for his own enrichment and to be in touch with students. It was at such an event that he encountered Aaron Bird Bear, a tribal member of the combined Mandan, Hidatsa and Diné Nations in North Dakota. Bird Bear, who is an administrator in the College of Education at UW-Madison, was a visiting guest speaker.

“The short story (of the lecture) was that the land that UW-Whitewater is on has a long history, 8,000-12,000 years, of being Native American lands,” said Bartlett.

As Bird Bear spoke, Bartlett felt energized. He had a brilliant new building with an award-winning design known only as “the new hall” at that time. It sparked an idea to provide the hall with a meaningful name that honored and recognized the area’s Native American past.

The electricity continued when Bartlett reached out to the offices of Student Affairs and Administrative Affairs with the idea of reflecting Native American culture in a name for the new hall. As it happened, Kenny E. Yarbrough, associate vice chancellor for Equity, Diversity, Inclusion, and Support Programs, had been receiving feedback from the Great Lakes Intertribal Council on a separate initiative, a draft of the university’s Land Acknowledgement Statement. The council and the Ho Chunk Nation became resources to help the university arrive at the Ma’iingan name.

“It was an emotionally moving experience for me,” said Bartlett, as the name went on to be embraced by the Residence Hall Association, Whitewater Student Government, campus administration, and the UW System Board of Regents. 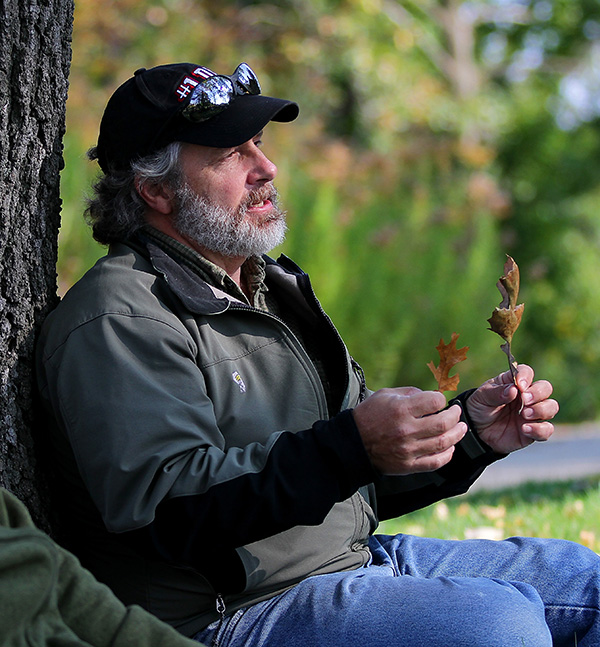 “It’s really timely in the great debate over wolves in Wisconsin,” said Tony Gulig, associate professor of history. “It’s a time to pick open the story of the different perceptions of wolves and what wolves mean to different people. To the Ojibwe people, the wolf is a guide, a brother, a friend, a co-equal. This area was jointly occupied, so finding the right source is complex. The wolf to the Anishinaabe, the Ojibwe people, is a guide to life. Their environment wasn’t a wilderness, it was a known place. So, it was a guide to life. I think it’s really appropriate to have a guide for these new students who will go into this residence hall.”

“And it is difficult at first for the students to pronounce,” Gulig added, “Which will cause them to think about it.”

The five-story, 400-student residence hall was designed by Eppstein Uhen Architects of Milwaukee with spaces throughout the building for people to gather. Outside is a large plaza equipped with picnic areas and charcoal grills. Inside, the floors are color-coded. Elevator doors open to shades of green on the lower floors, transitioning to blue on the upper floors. Off the elevator, each floor has a place for people to socialize and prepare food.

The celebration on Oct. 13 will include a drum circle with the Redcliff Singers of the Red Cliff Band of Lake Superior Chippewa and speakers from the Great Lakes Inter-Tribal Council and from the Ho Chunk Nation, which is the among the most recent of many Native peoples to live on land where the university was built.

Fittingly, the Land Acknowledgement Statement will be read at the celebration. The statement honors Native peoples who preceded the university and sustained the land. It is read at commencement and official university functions, beginning with the words “As We Gather.”

Gulig and student Cody Wing, a member of the Bad River Band of Lake Superior Chippewa, drafted the statement with help from Yarbrough in 2019. Wing, a Palmyra native who earned a degree in criminology, has since graduated. The draft was submitted to the Great Lakes Inter-Tribal Council, refined and ultimately gained approval from the council and UW System as the official Land Acknowledgement Statement for UW-Whitewater. 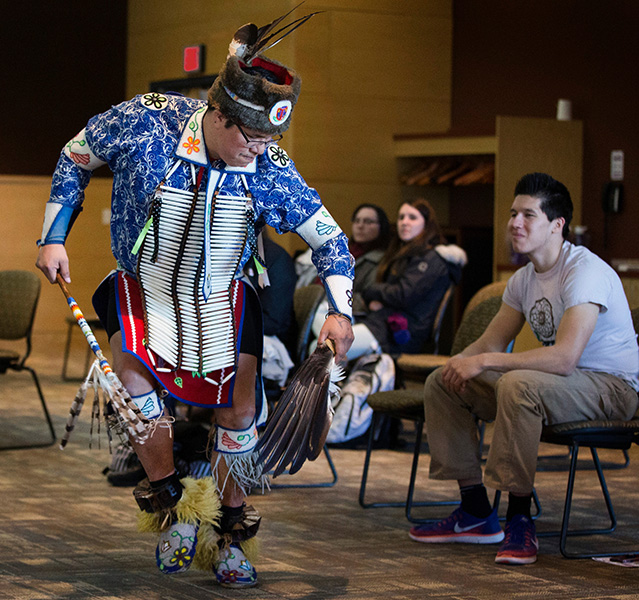 The Redcliff Singers have previously visited campus, including an event, pictured, in which Mino-Giizhik DeBungie performed a hunting dance observed by senior Cody Wing, then-president of the Native American Cultural Awareness Association. The singers will also perform after the naming ceremony at 7 p.m. in the Hamilton Room of the University Center in a program sponsored by the university’s Native American Cultural Awareness Association and its Residence Life program.